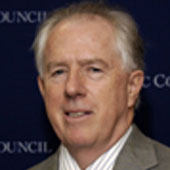 Banning Garrett is the Director of the Asia Program at the Atlantic Council, a position he has held since March 2009 (and previously from January 2003 through January 2007).

Before joining the Council in January 2003, he was a consultant for 22 years to the Department of Defense and other U.S. government agencies carrying on a strategic dialogue with China. He was also a senior associate at the Center for Strategic and International Studies and a founding board member of the U.S. Committee for Security Cooperation in the Asia Pacific (USCSCAP).

Dr. Garrett received his BA from Stanford University and his PhD from Brandeis University.

How to reel in the big one in terms of diplomatic relations with China?