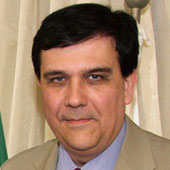 Carlos Ivan Simonsen Leal has been the president of Fundação Getúlio Vargas, a think tank and educational institution based in Rio de Janeiro, since 2000.

Before joining FGV in 1992, he was a consultant for Brazil’s central bank and a professor at the Escola de Pós Graduação em Economia. In 2002, he was awarded the National Order of Scientific Merit by President Cardoso for his contributions to the fields of science and technology.

He has a Ph.D. in economics from Princeton University. He earned a degree in civil engineering at the Federal University of Rio de Janeiro.