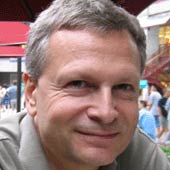 Dani Rodrik is the Rafiq Hariri Professor of International Political Economy at the John F. Kennedy School of Government at Harvard University.

He is the recipient, among other honors, of the inaugural Albert O. Hirschman Prize of the Social Science Research Council. An occasional contributor to The Economist, the New York Times, the Financial Times, New Republic and other journals, he lives in Cambridge, Massachusetts.

How can international labor mobility be improved to help raise incomes around the world?