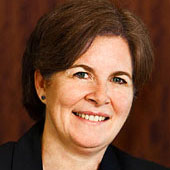 President and CEO of the Federal Reserve Bank of Kansas City

Esther L. George is president and chief executive officer of the Federal Reserve Bank of Kansas City and a member of the Federal Open Market Committee, which has authority over U.S. monetary policy. Before being appointed president on October 1, 2011, she had been the Bank’s first vice president and chief operating officer since August 2009, responsible for directing the Bank’s operations throughout the Tenth Federal Reserve District.

In January 2009, Ms. George was named executive vice president in charge of the Bank’s Division of Supervision and Risk Management, a division she led as senior vice president since 2001. In that position, she was responsible for the supervision and regulation of the District’s 170 state-chartered member banks and nearly 1,000 bank and financial holding companies, as well as the Bank’s discount window and risk management functions.

During her tenure in banking supervision, she was directly involved in the Tenth District’s banking supervision and discount window lending activities during the banking crisis of the 1980s and post-9/11. She is a former chair of the Federal Reserve System’s Community Banking Organizations Management Group.

Ms. George joined the Bank in 1982 and was appointed to the official staff in 1995. She holds a bachelor’s degree in business administration from Missouri Western State University and an MBA from the University of Missouri-Kansas City. She is a graduate of the American Bankers Association Stonier Graduate School of Banking and the Stanford University Executive Program.

Rebuilding Through Reform: How to Ensure Global Financial Stability

What steps can be taken to build a financial system that is better able to withstand future crises?