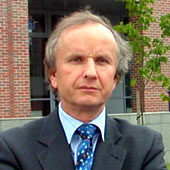 Grzegorz W. Kolodko is an intellectual leader and politician, a key architect of Polish economic reforms and a renowned expert on economic policy.

In 1989, he took part in historic Round Table negotiations leading to the first post-communist government in Central Europe. While Deputy Premier and Minister of Finance (1994-97), he led Poland’s membership bid to join the OECD. Holding the same positions again in 2002-03, he played an important role in Poland’s integration with the European Union.

Mr. Kolodko is the founder and Director of TIGER — Transformation, Integration and Globalization Economic Research — at Kozminski University in Warsaw. He is also a university professor, researcher, consultant to international organizations and columnist.

He is the author of numerous academic books and research papers on development policy and systemic transformation, published in 25 languages. They include "From Shock to Therapy: The Political Economy of Postsocialist Transformation" (Oxford, 2000), "Globalization and Catching-up In Transition Economies" (Rochester, 2002), "The Polish Miracles: Lessons for Emerging Markets" (Ashgate, 2005), "The World Economy and Great Post-Communist Change" (Nova Science, 2006), and a bestseller, "Truth, Errors and Lies: Politics and Economics in a Volatile World" (Columbia, 2011).

What shape will the global economy take over the next century?

What transformations will the world undergo over the next century?

How does U.S. policy toward Iran stymie the potential for a democratic, free-market Iranian revolution?

Triggering the Next Iranian Revolution (Part I)

Will the U.S. strategy toward Iran reverse the fundamental changes already under way in the country?