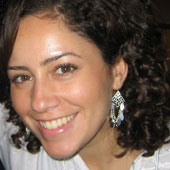 Ms. Chmela started her career as a member of The Globalist’s editorial staff, where she worked as our features editor from 2003 to 2005. Subsequently, she worked as a news assistant in the Washington Bureau of The New York Times. Her articles have appeared in newspapers around the world.

She earned a B.A. degree at American University, in Washington, D.C., in print journalism and political science.

Is Jordan's scarce water supply going down the drain?

What unique insights emerge when a non-Muslim observes Ramadan?