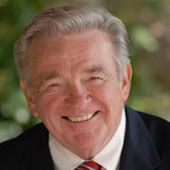 James Flanigan,a business columnist for the New York Times, Los Angeles Times and other publications, has covered national and international business and economics for 46 years.

He has focused on every aspect of business and finance, and examined the economies of countries stretching from Europe to Asia, Latin America, the Middle East and Africa.

For 20 years he wrote a column in the business section of the Los Angeles Times. He now writes for the New York Times.

Flanigan started as a financial journalist at the New York Herald Tribune in 1963. During 17 years with Forbes Magazine, he served as bureau chief in Washington, Los Angeles, London and Houston, and later in New York as assistant managing editor. His journalism has won numerous awards.

Flanigan, who was born in New York City, is a history and English graduate of Manhattan College. He and his wife Patricia have five adult children and an assortment of exuberant grandchildren.

What makes this region such a driving force in the United States?