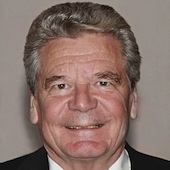 Joachim Gauck has been the President of Germany since March 2012. Previously he was appointed by the Bundestag as Federal Commissioner for the Stasi Archives, a position he held from 1990 to 2000 and in which he relentlessly pursued the truth about abuses by the East German secret police during the Cold War.

President Gauck rose to prominence as a pastor, civil rights activist and opposition organizer in East Germany before the unification of Germany in 1990. He has become known for his outspoken views on the dangers of communism and totalitarian rule, as well as the need to promote human rights and democracy around the world.

Until now we, as simple “users,” have given little thought to where this profound technical change will lead us.