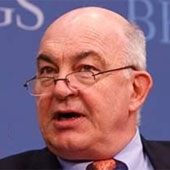 Kemal Dervis is vice president and director of Global Economy and Development at the Brookings Institution in Washington, D.C. He was head of the United Nations Development Programme from 2005 to 2009 and Minister of Economic Affairs of Turkey from 2002 to 2005.

Previously, Mr. Dervis held several high-ranking positions at the World Bank. He has taught economics at Princeton, Bilkent and Middle East universities and, since 2009, has co-taught a course on global economic governance at Columbia University.

He holds B.Sc. and M.Sc. degrees from the London School of Economics and a Ph.D. from Princeton University.

What are the potential consequences of increasing income inequality in the world's largest economy?