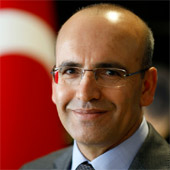 Before entering politics, Mr. Şimşek worked for Merrill Lynch in London for seven years as chief economist and strategist for emerging markets in Europe, the Middle East and Africa.

Mr. Şimşek holds a B.S. in economics from Ankara University and went on to work as research assistant in its International Economics and Economic Development Department. He received a State Scholarship to Exeter University, where he earned his M.Phil. in finance and investment.

Education: The Key to Turkey’s Prosperity