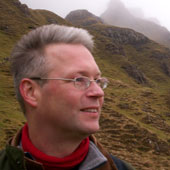 Mike Rapport is a senior lecturer in history at the University of Stirling, in Scotland, where he teaches European history.

He is author of 1848: Year of Revolution (Basic Books, 2009), Nineteenth-Century Europe, 1789-1914 (Palgrave-Macmillan, 2005), Nationality and Citizenship in Revolutionary France: The Treatment of Foreigners (Oxford, 2000). He also has a volume forthcoming on The Napoleonic Wars: A Very Short Introduction (Oxford, 2013).

He was elected fellow of the Royal Historical Society in 2000. With his colleague, Dr. Kevin Adamson, he is working on a research project on the "domino revolutions" from 1848 to the Arab Awakening of 2011.

Will the 2011 revolutions in the Middle East give way to a counterrevolutionary movement that rolls back its reforms?