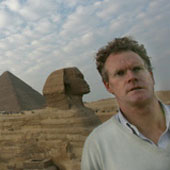 He previously served as Cairo bureau chief from 2001 through 2005.

His Mideast expertise predates his Cairo assignment. He grew up in Libya and covered the region for the AP, including stints in Israel and Kuwait.

How much power do security agencies in the Middle East exercise in their countries?

What does "jihad" mean to Muslims in the Middle East?

Expatriates in the Middle East

How do everyday businesses function under Islamic law?