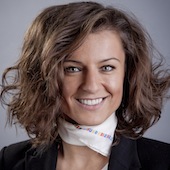 Patrycja Sasnal is head of the Middle East and North Africa Project at the Polish Institute of International Affairs.

She was a 2010 Fulbright Scholar at the Paul H. Nitze School of Advanced International Studies (SAIS) at Johns Hopkins University, in Washington, D.C.

Previously, she was also an associate professor at the American University in Beirut and a visiting student at Sorbonne Nouvelle, Paris III. She previously lectured at Jagiellonian University, in Krakow, Poland, where she earned a Master’s degree international relations, a Master’s degree in Arabic language and culture, and a Ph.D. in political science.

Saudi Arabia: On the Inside Track in Egypt

How extremism migrated from Saudi Arabia to Egypt.

Western leaders still grossly distort what’s going on in Egypt. It’s really no better than what happens in Syria.