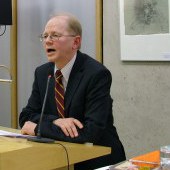 Thuringia Delegation to the German Federation

Raimund Grafe is Chief of Staff of the delegation of the Free State of Thuringia to the German Federation.

Previously, Mr. Grafe was a Berlin-based official for the Free State of Saxony. From 2004-2008, he served as Chief of Staff of Saxony’s Minister of Economics.

Following German reunification in 1990, he worked at the U.S. Consulate in his home town of Leipzig. He subsequently worked in the Saxony State Legislature.

In 1988/89, he was a Guest Scholar at the Brookings Institution in Washington, D.C.

Raimund Grafe grew up in India from 1961 to 1975. After graduating from the prestigious Kodaikanal International School in South India, he returned to Germany. In April 2014, he accompanied the economics minister of Thuringia and a large trade delegation to India.

He studied political science and economics at the University of Munich and Sciences Po in Paris.

The Growing Regional Divide in India

Regionalism may triumph in India as it did in Germany, changing the face of Indian democracy.