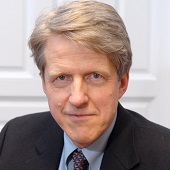 Robert J. Shiller is the Arthur M. Okun Professor of Economics at Yale University and professor of finance and fellow at the International Center for Finance, Yale School of Management. Mr. Shiller was a co-recipient of the 2013 Sveriges Riksbank Prize in Economic Sciences in Memory of Alfred Nobel.

He has published several books, including Irrational Exuberance (Princeton, 2000), The New Financial Order: Risk in the 21st Century (Princeton, 2003), and Subprime Solution: How the Global Financial Crisis Happened and What to Do about It (Princeton, 2008). With George A. Akerlof, he co-authored Animal Spirits: How Human Psychology Drives the Economy and Why It Matters for Global Capitalism (Princeton, 2009). His most recent book, Finance and the Good Society, was published in April 2012 by Princeton University Press.

Mr. Shiller has been a research associate of the National Bureau of Economic Research since 1980. He has been co-organizer of NBER workshops on behavioral finance (with Richard Thaler) since 1991 and on behavioral macroeconomics (with George Akerlof) since 1994. He has served as vice president of the American Economic Association and president of the Eastern Economic Association.

He received his B.A. from the University of Michigan and his Ph.D. in economics from the Massachusetts Institute of Technology.

The Democratization of Banking

Do we need to repeat the 19th-century savings bank movement for the 21st century?

The Democratization of Banking

What steps should policy makers take to ensure that bank services are available to the broadest number of people?

Financial Capitalism: A Safe Venue for Power Struggles Without Violence

Who still remembers that, before the advent of modern financial capitalism, power was wielded in much starker ways?

The State of Finance: An Interim Assessment

What can be done so that financial capitalism is a source not of disasters, but of true human progress and democratization?