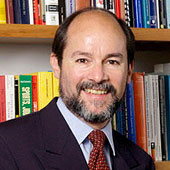 Robert Z. Lawrence is Senior Fellow at the Peterson Institute for International Economics — and the Albert L. Williams Professor of International Trade and Investment at Harvard University's Kennedy School of Government.

He is also a Research Associate at the National Bureau of Economic Research. He currently serves as Faculty Chair of The Practice of Trade Policy executive program at Harvard Kennedy School.

Mr. Lawrence served as a member of the President’s Council of Economic Advisers from 1998 to 2000. Lawrence has also been a Senior Fellow at the Brookings Institution. He has taught at Yale University, where he received his PhD in economics.

Mr. Lawrence’s research focuses on trade policy. He is the author of several works, including "Crimes and Punishments? Retaliation under the WTO" and "Can America Compete?"

He has also served on the advisory boards of the Congressional Budget Office, the Overseas Development Council, and the Presidential Commission on United States-Pacific Trade and Investment Policy. In addition, he founded and edited the Brookings Trade Forum.