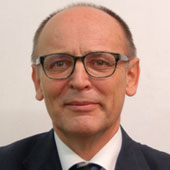 Special Adviser for Media and Communications, EC's Representation in Italy

Thierry Vissol is an economist specializing in monetary history and social philosophy. He has he taught at various universities in France (Limoges), Belgium (Brussels and Mons) and the United States (Yale). With Robert Triffin, he founded Centre Ecu et Prospective d’Intégration Monétaire Européenne (CEPIME) and its quarterly review, "De Pecunia," which he edited from 1986-1992.

As a civil servant in the European Commission, Mr. Vissol was directly involved in preparations for EMU. From 1993 to 2009, he was the head of the EC’s task force on audiovisual communications, which created the presseurop.eu and euranet.eu websites, the EU calendar, and a data bank on TV stations (MAVISE).

Mr. Vissol is now the special adviser for media and communications in the EC’s Representation in Italy, where he produces two weekly radio programs, "22 Minutes a Week in Europe" and "A Book for Europe."

A Eurozone Crisis or a Global Crisis?

Is the euro crisis just a European crisis — or is it a global crisis in search of a global governance solution?