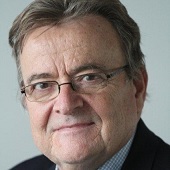 Thomas Kielinger has been UK correspondent for the German national daily Die Welt since 1998. He had earlier served as the paper’s Washington, D. C. correspondent between 1977 and 1985.

On his return from the United States, he became editor-in-chief of the weekly Rheinischer Merkur. In 1994, he started his own business as writer, broadcaster and political consultant.

His latest book, a biography of Winston Churchill, appeared in September 2014, ahead of the commemoration of the 50th anniversary of Churchill’s death in January 2015. It is also now available as an unabridged audio book.

For his contributions in the field of Anglo-German relations, Kielinger was made an Honorary Officer of the Order of the British Empire (OBE) and was also awarded the German Order of Merit. He is an acclaimed public speaker, a skill he honed during his eight years as a correspondent in the United States.

Mr. Kielinger was born in Danzig, modern-day Gdańsk, in 1940. He is married with four children.

Merkel’s Decision to Back Cameron is Rooted in History

Germany needs the UK as part of the EU's dynamic core.