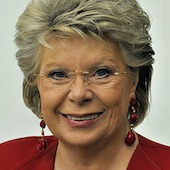 Viviane Reding is a Luxembourg politician. She currently serves as the Commissioner for Justice, Fundamental Rights and Citizenship in the European Commission.

From 1978 to 1999, Ms. Reding was a journalist for Luxembourg’s leading newspaper, the Luxemburger Wort. From 1986 to 1998, she was also president of the Luxembourg Union of Journalists.

She earned her doctorate in human sciences at the Sorbonne.

Overcoming the Gulf in U.S. and European Business “Civilizations”