Exits from the Rat Race

How did today’s crisis-prone, Darwinian capitalism come about?

By Robert and Edward Skidelsky 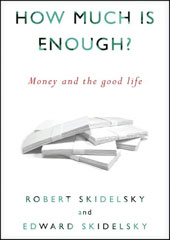 How Much Is Enough? by Robert Skidelsky and Edward Skidelsky 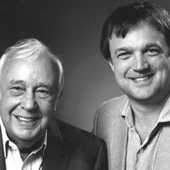 Robert and Edward Skidelsky are the authors of “How Much is Enough? Money and the Good Life.”

For the sake of remaining “at the top of our game,” Western countries maintain an economic system that continues to celebrate acquisitiveness at the expense of enjoyment. Our leaders can offer no more than a continuation of economic growth for ever and ever. They do this despite the plentiful evidence that the capitalist system in our part of the world is entering its degenerative phase.

The chief sign of this is the dominance of finance, in love with itself but increasingly bereft of useful things to do. The Anglo-American version of individualistic capitalism is kept going largely for the benefit of a predatory plutocracy. Its members cream off the richest prizes, while justifying their predation in the language of freedom and globalization.

Political leaders, meanwhile, continue to enjoy the sound bites of power. The underlying reality is well hidden from public scrutiny, or even understanding. At the core of our system is a moral decay that is tolerated only because the cleansing of its Augean stables is too traumatic to contemplate.

It is worth recalling that the ideal of economic growth as an end without end is of fairly recent origin. When, in 1957, British Prime Minister Harold Macmillan told voters that they’d “never had it so good,” he was echoing the widely held view at the time that the capitalist countries of the West were rapidly approaching a consumption plateau.

The main problem of the future would be to ensure that the fruits of the new abundance were democratically distributed. James Galbraith’s hugely influential 1958 book, The Affluent Society, with its images of “private affluence, public squalor,” caught this mood. The assumption of abundance, and consequent revulsion against technology and psychological distancing from the world of work, was the imaginative backdrop of the American utopian movements of the 1960s.

The intriguing question is this: Why did the perception of imminent bliss of the 1960s lead to the restoration of Darwinian capitalism in the 1980s? What brought Ronald Reagan and Margaret Thatcher to power and led to the renewal of free-market fundamentalism?

It is easy to see that bliss was an illusion. Why? Because richer societies are likely to become more, rather than less, acquisitive, as the power of relative wants grows. But this secular trend does not explain the sudden collapse of the system of political economy that had brought the rich part of the world to the dawn of universal abundance.

In these circumstances, economic thinking was free to concentrate once more on the efficiency with which output was produced. This was more congruent with the maximizing spirit of economics — that is, getting the most use out of a given stock of resources.

That growth could become an object of economic policy was in large measure due to the development of national income statistics — GDP — which enabled comparisons between countries’ economic performance. And, in the aftermath of two supremely destructive wars, to make peoples richer (rather than nations more bellicose) seemed an eminently civilized object of striving.

There were two ancillary reasons. The first was that the West as a whole felt it needed to speed up its rate of growth to maintain the arms race with the Soviet bloc. Not only did the Soviet system seem to be growing faster than Western capitalism in the 1960s, but, by suppressing private consumption, it was able to devote a much higher proportion of its growing wealth to military spending. The West needed to show it could produce both guns and butter.

The second reason was that faster economic growth was a way of circumventing the facts of power. It offered a way of improving the position of the poor without having to increase taxes on the rich. In this second aspect, economic growth was a left-wing policy to benefit the working class without igniting latent class conflict over the distribution of the national product.

Ideological faith in the market system

The apostles of growth of the 1960s were mainly left-wing economists and politicians who had abandoned — or in the United States never embraced — public ownership as a mechanism, but retained their socialist aspirations for a more equal society. This was particularly appealing in slow-growing Britain.

However, this was still some way from the crisis-prone Darwinian capitalism of our own day. The essential ingredient that Thatcher (elected in 1979) and Reagan (elected in 1980) added to the philosophy of growth was an ideological faith in the market system.

The way to faster growth lay not through planning, but freeing up markets from red tape, improving incentives through lighter taxes, reducing the power of trade unions and extending markets through privatization and deregulation. These steps in combination would make the allocation of capital more efficient.

The Thatcher-Reagan dispensation also viewed the growth of income inequality as acceptable insofar as it improved the incentives of the “wealth creators.” There would be a “trickle down” from rich to poor. This set of ideas became what Adair Turner calls the dominant “instrumental conventional wisdom” across the political world over the following thirty years.

In retrospect, it was the shift to a market-based philosophy of growth rather than to a growth-based philosophy as such that inflamed the insatiability of wants. “Planning for growth” needed to entail nothing more than bringing the welfare of the poor gradually up to the standard of rich.

By contrast, reliance on market-led growth marked the abandonment of any interest in the social outcome of the growth process. The economic system was to be geared to the maximization of individual satisfaction as expressed in markets. Individuals were no longer to be viewed as part of wholes. The wholes were simply the sum of individual parts. This reduction of economic life to a crude individualism can be dated from the 1970s.

This kind of market order was bound, of course, by the rule of law. But there was no longer any moral, political or cultural restraint on individual pursuit of wealth. The only restraint might arise from natural limits to growth itself.

And once that had happened, the governments of Reagan and Thatcher effectively handed their entire national economies back to the businessmen. The role of the state in management, ownership, regulation, allocation and distribution was drastically pared back.

Soon enough, the U.S. and UK governments gave up attempts to steer market forces to desirable social outcomes, limiting themselves to maintaining framework conditions for successful market performance. The wealth of nations would be made to grow faster by releasing acquisitiveness from its communal restraints, in a reprise of the arguments first advanced by Adam Smith and his followers.

With the assumed achievement of permanent full employment by policy, economic thinking was free to concentrate on the efficiency with which output was produced.

The essential ingredient that Thatcher and Reagan added to the philosophy of growth was an ideological faith in the market system.

Robert and Edward Skidelsky are the authors of “How Much is Enough? Money and the Good Life.”

With the assumed achievement of permanent full employment by policy, economic thinking was free to concentrate on the efficiency with which output was produced.

The essential ingredient that Thatcher and Reagan added to the philosophy of growth was an ideological faith in the market system.

The Cost of a Human Life, Statistically Speaking