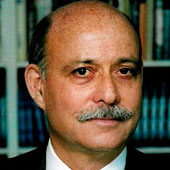 Hydrogen is plentiful and exists everywhere on earth. As the world moves toward a hydrogen economy, every human being could be "empowered," making it the first truly democratic energy regime in history.

And just why should hard-nosed politicians, not just environmentalists, hope — and work — for the quick onset of that era? The answer is simple. Hydrogen has the potential to end the world's reliance on imported oil.

And it can help diffuse the dangerous geopolitical game being played out between Muslim militants and Western nations. It will also dramatically cut down on carbon dioxide emissions and mitigate the effects of global warming.

The emerging hydrogen economy makes possible a vast redistribution of power, with far-reaching consequences for society. Today's world is shaped by the centralized, top-down flow of energy, controlled by global oil companies and utilities. But that world may well become obsolete.

In the new era, every human being could become the producer — as well as the consumer — of his or her own energy. This process is called "distributed generation."

When millions of end-users purchase and install fuel-cells and connect them into local, regional and national hydrogen energy webs (HEWs), using the same design principles and smart technologies that made possible the World Wide Web, they can begin to share energy — peer-to-peer — creating a new decentralized form of energy use.

In the new hydrogen fuel cell era, even the automobile itself will become a "power station on wheels" with a generating capacity of 20 kilowatts. Since the average car is parked most of the time, it can be plugged in, during non-use hours, to the home, office or the main interactive electricity network.

It would thus provide premium electricity back to the grid. The revenue gained from selling energy back to the grid could help defray the cost of the lease or purchase price of the vehicle.

If just 25% of drivers used their vehicles as power plants to sell energy back to the grid, all of the power plants in the United States could be eliminated altogether.

Power companies are going to have to come to grips with a world where millions of local operators, generating electricity from fuel cells on site, can produce more power more cheaply than can today's giant power plants.

When the end users also become the producers of their energy, the only role remaining for existing power plants is to become "virtual power plants." Their new mandate would be to manufacture and market fuel cells, bundle energy services — and coordinate the flow of energy over the existing power grids.

Whether hydrogen actually becomes "the people's energy" depends to a large extent on how it is harnessed in the early stages of development.

Like the "net" activists of the last decade, a new generation of energy activists is beginning to argue that hydrogen energy ought to be shared. Making that happen will require that public institutions and non-profit organizations — local governments, cooperatives, community development corporations, credit unions and the like — jump in at the beginning of the new energy revolution.

Their task would be to help establish distributed generation associations (DGAs) in every country. By organizing collectively, end users would have a much stronger position to negotiate the terms with commercial suppliers of fuel cells for lease, purchase or other use arrangements.

Connecting the whole of humanity into hydrogen energy webs is going to require the active participation of the private sector as well. Commercial enterprises will develop and manufacture the new hardware and software of the distributed-generation revolution.

And they will play a big role in bundling energy services and coordinating the flow of energy on the hydrogen energy web.
Creating the appropriate partnership between commercial and non-commercial interests will be critical to establishing the legitimacy, effectiveness, and long-term viability of the new energy regime.

In all of this it is important to remember that one-third of the human race has no access to electricity — or any other form of commercial energy.

The disparity between the "connected" and the "unconnected" is deep already. But it threatens to become even more pronounced over the next half century, with world population expected to rise from the current 6.2 billion to 9 billion people.
Most of the population increase is going to take place in the developing world where poverty is concentrated.

Lack of access to energy, and especially electricity, is a key factor in perpetuating poverty around the world. Today, the per capita use of energy throughout the developing world is a mere one-fifteenth of the consumption enjoyed in the United States.

The global average per capita energy use for all countries is only one-fifth the level in the United States. Conversely, access to energy means more economic opportunity. In South Africa, for example, for every 100 electrified households, 10 to 20 new businesses are created.

Electricity frees human labor from day-to-day survival tasks. Simply finding enough firewood or dung to warm a house or cook meals in resource poor countries can take hours out of each day.

Making the shift to a hydrogen energy regime is the only way to lift billions of people out of poverty. Renewable resources will be increasingly used in the third world to produce hydrogen — and create distributed generation energy webs that can connect communities all over the planet.

While the price of renewable energy technologies, hydrogen and fuel cells is still high at present, it will continue to go down with new innovations and economies of scale. They will become far more broadly available as was the case with transistor radios, computers and cellular phones.

The global community's goal ought to be to provide stationary fuel cells for every neighborhood and village in the developing world.

Villages can install renewable energy technologies — such as photovoltaic, wind and biomass — to produce their own electricity. They can then use the electricity to separate hydrogen from water — and store it for subsequent use in fuel cells.

In rural areas, where commercial power lines have not yet been extended, because it is too expensive, stand-alone fuel cells can provide energy quickly and cheaply.

After enough fuel cells have been leased or purchased and installed, mini-energy grids can connect urban neighborhoods as well as rural villages into expanding energy networks.

The hydrogen energy web can be built organically and spread as the distributed generation becomes more widely used.

The larger hydrogen fuel cells have the additional advantage of producing pure drinking water as a byproduct. That is a not insignificant consideration in village communities around the world — where access to clean water is often a critical concern.

Breaking the cycle of dependency and despair, becoming truly "empowered," starts with access to — and control over — energy. Micro-credit lending institutions and local governments ought to view distributed generation energy webs as the core strategy for building sustainable, self-sufficient communities.

National governments and world lending institutions ought to be smart enough to help provide both financial and logistical support for the creation of a hydrogen energy infrastructure.

Equally important, new laws will need to be enacted to make it easier to adopt distributed generation.

In addition, public and private companies will have to be required to guarantee distributed generation operators access to the main power grid — and the right to sell energy back or trade it for other services.

With access to hydrogen energy, local peoples would be less subject to the will of far off centers of power. Communities would be able to produce many of their own goods and services — and consume the fruits of their own labor locally.

But because they would also be connected via the worldwide communications and energy webs, they would be able to share their unique commercial skills, products and services with other communities around the planet.

This kind of economic self-sufficiency becomes the starting point for global commercial interdependence.

That is a far different economic reality than the one that characterized colonial regimes of the past, where local peoples were made subservient to — and dependent on — powerful forces from the outside.

By redistributing power broadly to everyone, it is possible to establish the conditions for a truly equitable sharing of the earth's potential bounty — and this is the essence of the politics of re-globalization from the bottom up.

The fossil-fuel era brought with it a highly centralized energy infrastructure and an accompanying economic infrastructure, that favored the few over the many.

Now, on the cusp of the Hydrogen Age, it is possible to imagine a decentralized energy infrastructure, the kind that could support a democratization of energy, enabling individuals, communities and countries to claim their independence, while accepting responsibility for their interdependence as well.

In the early 1990s, at the dawn of the Internet era, the demand for "universal access" to information and to communications became the rallying cry for a generation of activists, consumers, citizens and public leaders.

Today, as we begin our journey into the hydrogen era, the demand for universal access to energy ought to inspire a new generation of activists to help lay the groundwork for establishing sustainable communities. After all, if technological advances permit it — and the environment benefits from it — why not go for it?

The hydrogen economy is within sight. How fast we get there will depend on how committed we are to weaning ourselves off of oil and the other fossil fuels. What are we waiting for?

Jeremy Rifkin is the author of The Hydrogen Economy: The Creation of the World Wide Energy Web and the Redistribution of Power on Earth (Tarcher/Putnam, 2002).

The Dawn of the Hydrogen Economy