Islam and War — The Real Story 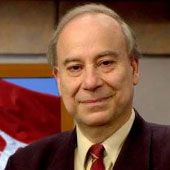 Ambassador, anthropologist and author Akbar S. Ahmed is the Ibn Khaldun Chair of Islamic Studies and professor of International Relations at American University, in Washington, D.C. Born in Allahabad, a small town on the Ganges River in what was then British India, Mr. Ahmed is a distinguished anthropologist, writer and filmmaker. He has been actively […]

As the United States of America is preparing to go to war in the Middle East, it is worth asking what Islam says about war. Do the United States — or its opponents in the region — meet the surprisingly strict requirements that Islam imposes before Muslims can go to war? Professor Akbar Ahmed, anthropologist and Chair of Islamic Studies at American University, explains.

What does jihad mean? For many non-Muslims, jihad has come to mean war — a war waged in the name of Islam. But that is a distortion of the true meaning of Islam — and the actual Muslim attitude towards war.

Start with Jihad. The word Jihad simply means striving — not war, not battle. Jihad itself is divided into two categories: The Greater Jihad and the Lesser Jihad.

The Greater Jihad is the internal struggle we are involved with — regardless of our specific religion or whether we are religious or not.

Islam is very clear about when one can go to war. War is only to be fought: First, in self-defense. And, second, on the basis of the principles of justice, against tyranny — and in the name of God.

Let me be clear. A good Muslim does not initiate war for personal or political reasons. He only fights in the name of God.

Let me illustrate this important point with a story about Ali — the son-in-law of the prophet of Islam and a major figure within Islam.

At that time and place, when armies fought, battles often began with a duel of champions. Quite commonly, if a champion defeated his opponent, that opponent's army might just give up — and leave.

Ali was a scholar, and also a renowned warrior, extraordinarily brave. One time, Ali was fighting the champion of the opposing army. He pushed his opponent on the ground, jumped on his chest — and lifted his sword to finish the opponent.

At that point — with both armies watching in great suspense — the opponent, lying on the ground with Ali on his chest, spat on Ali's face.

The Muslim army got very tense when this occurred. Remember, it was a tribal society dominated by notions of revenge and honor.

So when the victor got up, everybody expected him to be even more vicious and brutal to the defeated. But the army saw an amazing sight. Ali stood up and suddenly walked away.

The generals gathered around and asked him, "Why did you just walk away? If you knocked down your opponent, why didn't you finish him?"

This story illustrates how a Muslim is supposed to view warfare. It tells us what should motivate a Muslim to fight.

But what about behavior during the actual fighting? Islam contains specific instructions to avoid anarchy and chaos. When war is conducted, Muslims are expected to behave in a certain way.

Abu Bakr, the first caliph of Islam — another great figure in Islamic history — laid down what are probably the first rules of war in history.

These are remarkable. With the drumbeat of war currently in our ears, they are especially worth considering. Remember, these rules originated in 7th century Arabia. They were developed in a tribal society that had just become Islamic.

According to the rules, a Muslim in battle — or afterwards — should not touch a woman or a child. He should not touch priests — a Christian priest or even a Hindu priest — for these are people of God.

A Muslim should not destroy a tree or any vegetation. I — living in the 21st century — am impressed by the "civilized" and "humane" approach. Once again, the key idea is that in a war you should be fighting for a principle that transcends your individual emotions or political — or ideological — beliefs.

Unfortunately, these rules have not been obeyed in the vicious, violent confrontations that we have seen in our world today.

When Saddam Hussein invaded Kuwait and withdrew, there were many stories of Saddam's soldiers raping, looting and killing Kuwaitis. That is not Islamic behavior. Saddam also destroyed the oil wells, a wanton act of destruction.

Muslim leaders are failing to live up to the Islamic rules of war-and in too many cases even of peace-that is why there is so much anger, disillusionment and despair in the Muslim world.

This article is based on a talk, “An Islamic Perspective on War,” given by Akbar Ahmed at St. Peter's Episcopal Church in Arlington, VA on January 19, 2003.

Ambassador, anthropologist and author Akbar S. Ahmed is the Ibn Khaldun Chair of Islamic Studies and professor of International Relations at American University, in Washington, D.C. Born in Allahabad, a small town on the Ganges River in what was then British India, Mr. Ahmed is a distinguished anthropologist, writer and filmmaker. He has been actively […]