Learning to Love Inflation (Thanks To Quantitative Easing)

Why should real capitalists and long-term investors love quantitative easing? 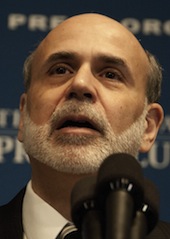 Since its introduction at the peak of the financial crisis in 2008, quantitative easing (QE) has had its fair share of critics. Today, we face a chorus of fresh calls for the U.S. Fed to wind down QE operations.

Quantitative easing has caused dismay among economic conservatives, who are convinced that “printing money” is a sure way to trigger runaway inflation.

There should be little doubt that quantitative easing has introduced an inflationary impulse into the world’s major economies.

But then, economic conservatives should keep in mind that, although seldom acknowledged, one of the primary objectives of quantitative easing is to do exactly that, namely to introduce inflationary pressures into a deflationary economic cycle.

The knee-jerk reaction of economic conservatives is that inflation is bad, very bad and that we should be afraid, be very afraid. And for many, inflation is in fact bad.

At the end of the day inflation is a tax on wealth. It erodes the accumulated wealth of upper middle class savers and millionaire capitalists alike.

On the other hand, inflation serves as a general balm to the economy as a whole. It enables debtors to repay obligations in cheaper dollars, thereby lowering the risk of broad-based defaults. It raises asset values, in particular for equities and real estate.

And it helps mobilize investment capital. We can talk until we are blue in the face about capital “sitting on the sidelines,” or investors concerned about political “uncertainty.”

The only thing that will get them moving is the threat of inflation. It literally forces capital to invest and to take risk.

In fact, in an inflationary environment, undeployed capital will simply erode over time, so that risk-taking ceases to be a matter of choice; but instead it becomes a financial imperative.

Forcing capital out of hiding during a deflationary cycle is an alternative form of stimulus when that stimulus can’t be had otherwise, preferably in the form of more public debt to finance infrastructure. It is essential in triggering economic growth.

But there are other reasons to support a bit of inflation. The stock market, for example, loves a steady and persistent inflation rate.

As long as inflation doesn’t manifest itself in fits and starts or cross the red lines of the conservative imagination, inflation promotes top line corporate growth, which good managers can bring down to the bottom line.

QE has also helped restore stock market levels to pre-Lehman levels by freeing capital from fixed income markets to be redirected into equities.

A stock market that saw approximately 40% of its total value wiped out in a matter of months — as was the case in the United States — could hardly expect an economic recovery unless confidence in financial assets had been restored.

Quantitative easing has made an important contribution toward accomplishing this goal.

And yet, the Cassandras of the right staunchly predict that an equity bubble is forming. In this respect, it is important to note that, since its 2007 peak, the price/earnings ratio of the S&P 500 is lower at 16 than the 17.34 it clocked at its peak in 2007. And it is substantially lower than it was in the years leading up to 2007.

The same is true for the index’s price/book ratio. Dividend yield is also higher today than in 2007 and the years leading up to it.

Importantly, sales for the index have risen roughly 13% from 2007 levels. These statistics should dispel any notion that an equity bubble is forming.

The stock market is only one component of the national balance sheet. The biggest U.S. balance sheet aggregate is real estate, which was the culprit behind the 2007-2008 crash.

Today, thanks to QE, real estate values in most regions of the United States have been restored to pre-crash levels.

There is a simple reality to banking: an economy cannot thrive without a healthy banking system. Economic observers on the both the left and right, because of broad-based antipathy toward banks, often overlook this simple idea.

This antipathy is certainly not without justification. Starting in the late 1970s with an ongoing process of deregulation and an attendant decline in regulatory oversight, a culture of greed was nurtured within the U.S. banking system.

But animus toward banks, even though it may be warranted, is merely a form of economic self-loathing. It impedes systemic recovery, which in turn impedes economic recovery.

Bank balance sheets had been shredded. Assigning values to assets required a dartboard rather than a spreadsheet, because there were no real values to be assigned. Every major balance sheet aggregate was shrouded in chaos, if not in free fall.

Today, the US banking system has been nurtured back to good health and finally stands ready to resume its essential role in fostering economic growth. QE has played an essential role in bringing about this outcome.

The resumption of a steady inflation rate, the recovery of equity assets to pre-crash levels, the stabilization of real estate markets at pre-crash levels and the restoration of health to the U.S. banking system all point to better days ahead.

And yes, in spite of the clear benefits of QE to date, economic conservatives today do what they have been doing for five years: calling for an end to quantitative easing. They cite the imminent threat of inflation as the inevitable consequence of QE, even as the inflation rate stands at less than the Fed target of 2% per year.

They complain about the debasement of the U.S. dollar, even as the price of gold and other hard asset values continue to trend lower.

Now is not the time to call an end to QE. Problems in foreign economies remain unresolved and government spending in the United States is under pressure as a result of sequestration.

The implementation of the Affordable Care Act may put a damper on growth, at least in the short term, and tax increases enacted at the beginning of the year are likely also to be a modest drag on growth.

These are significant headwinds that threaten sustained robust growth here in the United States. They are what made it mandatory for the Fed to keep its policy option, including Quantitative Easing, open and at the ready.

The threat of inflation literally forces capital to invest and to take risk.

In an inflationary environment, risk-taking ceases to be a matter of choice.

Risk becomes a financial imperative. Forcing capital out of hiding is an alternative form of stimulus.

The stock market, for example, loves a steady and persistent inflation rate.

Inflation promotes top line corporate growth, which good managers can bring down to the bottom line.

The threat of inflation literally forces capital to invest and to take risk.

In an inflationary environment, risk-taking ceases to be a matter of choice.

Risk becomes a financial imperative. Forcing capital out of hiding is an alternative form of stimulus.

The stock market, for example, loves a steady and persistent inflation rate.

Inflation promotes top line corporate growth, which good managers can bring down to the bottom line.