The Fallout From Michigan

Takeaways for the would-be frontrunners from Tuesday’s U.S. presidential primaries. 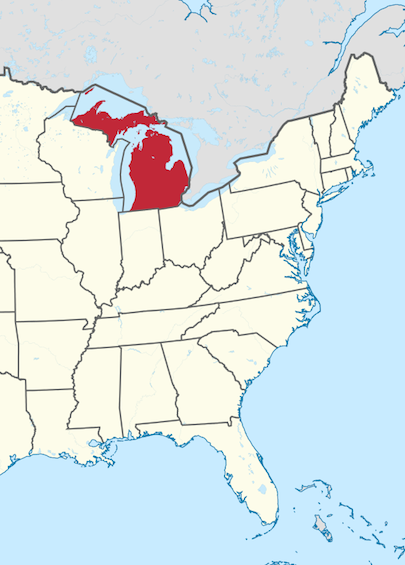 Map of Michigan within the United States. Credit: Wikimedia Commons

Michigan is no fluke. The outcome last night mirrors the outcomes in other historically blue states, where Hillary has been unable to post a single convincing win.

The reality is that Hillary is an unappealing candidate. Her last coronation ended badly when she lost to a U.S. Senator who was tarred as merely a black community organizer.

This time, her coronation is in jeopardy from a U.S. Senator who is admittedly a septuagenarian socialist (however inaccurate that label might be). This should tell us something.

So far, her “big” victories have occurred only in Southern states that the Democratic Party has no chance of carrying in November. But there are very few Southern states remaining on the primary calendar.

Conversely, some big states, like California where sentiment seems to be open to the Bernie “revolution,” come at the tail end of the primary process.

Keep in mind that all of the remaining Democratic primaries allocate delegates on a proportional basis. (All remaining Republican primaries are winner-take-all.)

This means that Bernie, if he maintains his momentum, has a good chance of coming to the convention with a roughly equal number of delegates as Hillary, excluding her batch of “at large” superdelegates.

If she wins the nomination based on these superdelegates, however, she’ll face a groundswell of dissatisfaction within the Democratic Party that will undermine the party’s willingness to rally behind its nominee. Such an outcome would dampen enthusiasm and diminish turnout.

She needs some solid wins next Tuesday, where the trajectory of the election will be determined mainly by outcomes in Ohio and Florida – in no small part because of their battleground value for November.

If Bernie wins or keeps it close next week, he will only gather strength in many of the remaining big state primaries, including New York and California, and turn Hillary’s coronation upside down.

The Republican Party threw everything it had in its arsenal at Donald Trump over the past week and he emerged stronger than ever, exceeding polling data in both Michigan and Mississippi.

Trump is looking like the strongest candidate in each of the states holding primaries next Tuesday.

Although all of the media commentary has centered on primaries in Florida and Ohio, it is important to note that primaries will also be held in Illinois, Missouri and North Carolina.

Illinois and North Carolina each have a larger number of delegates up for grabs than Ohio.

Based on current polling data, Trump could run the table in these next five primaries! Since they are all winner-take-all primaries, it would be all over but the crying for the Republican Party.

Momentum will be on Trump’s side in all of the remaining primaries, most of which are in states that have little fondness for any of his opponents. Accordingly, the GOP’s presidential candidate will effectively be determined.

Even so, Trump may not arrive at the Republican convention with a sufficient number of delegates to win the nomination. He will, however, have enough to bully his opponents into letting him take the nomination without the “Sturm und Drang” of a brokered convention.

As Richard Nixon once said, “As soon as you hear about a ‘Stop Somebody’ Campaign, bet on the Somebody.”

The Trickster must have a big smile on his face as he looks down on the Party of his own creation. Trump is looking more and more unstoppable.

Hillary is an unappealing candidate in Michigan. Her last coronation attempt ended badly.

Bernie has a good chance of ending up with a roughly equal number of delegates as Hillary.

Trump is about to enter a run of winner-take-all states he could sweep, effectively forecasting the final outcome.

Hillary is an unappealing candidate in Michigan. Her last coronation attempt ended badly.

Bernie has a good chance of ending up with a roughly equal number of delegates as Hillary.

Trump is about to enter a run of winner-take-all states he could sweep, effectively forecasting the final outcome.

Why I’ll Be Voting for Trump