Why the U.S. strategy to remake Afghanistan after 9/11 was bound to fail. 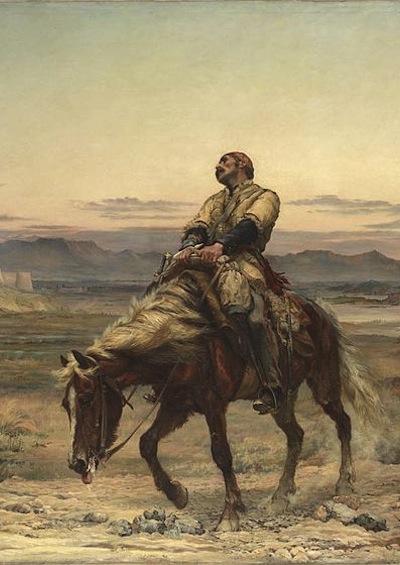 'Remnants of an Army' by Elizabeth Butler, portraying William Brydon arriving Jalalabad alone in the 1842 evacuation of Kabul. (via Wikipedia)

After 13 years of occupation, the U.S. armed forces are about to pull out of Afghanistan. They invaded the country in November 2001 to destroy the core leadership of al-Qaeda. That was a clear and straightforward mission, but it was bungled from the word “go.”

U.S. President Barack Obama finally made the move, reluctantly and slowly, five and half years into his presidency. Even now, the full pullout is not scheduled to be completed for another two and half years until the end of 2016.

It appears that Obama and his advisers have finally recognized that the nation-building goal in Afghanistan has been a total failure. Even so, they want to defer a full U.S. pullout until the president has safely left office. That means that his eventual successor will have to deal with the full consequences of that failure.

Obama was not the author of the crucial decision to stay in Afghanistan after ousting the Taliban who supported al-Qaeda and Osama bin Laden. George W. Bush, arguably the most catastrophic U.S. president since Herbert Hoover, did that.

But Obama, urged on by Secretary of State Hillary Clinton and Defense Secretary Robert Gates, did make the crucial decision to stay the course rather than cut U.S. and Allied losses after he took office. Only Vice President Joe Biden strongly pushed the case for full and rapid withdrawal at that time.

In electing to maintain Bush Jr.’s nation-building policies in Afghanistan, Obama, Clinton and Gates also chose to ignore the entire consistent course of Afghan history over the past 2,300 years since the time of Alexander the Great. And they proved blind and deaf to the disastrous experiences of the British and Soviet empires in that country.

At the time, U.S. President George W. Bush, Defense Secretary Donald Rumsfeld and their team of “geniuses” determined that it would be better to stay in the country. They had visions to turn Afghanistan into a stable, modern, pro-Western and centralized, Western-style state.

After over 2,700 American lives and countless more Afghan ones have been lost, at a cost to the U.S. taxpayer of over 1 trillion dollars, the Afghan people are far more anti-American today than they were when they joyously accepted (by and large) liberation from the Taliban in November 2001.

At the time, President Bush and his advisers all made much of their reverence for Britain’s World War II leader Winston Churchill. Almost half a century before that war, Churchill eagerly participated as a young man in the Malakand Field Force, a British military expedition into Afghanistan.

The dream of repeating and improving upon Churchill and the British Empire’s exploits in Afghanistan was a powerful emotional force among Bush’s neocon advisers in 2001.

One of them even bought a special bracelet for his wife engraved “Kandahar” to celebrate the supposed “monumental” fall of that city to U.S. forces.

Easy to get in

However, the ignorance of U.S. policymakers and pundits regarding Central Asian history blinded them to the fact that the initial act of defeating Afghanistan has always been easy. The British did it in 1839-42, 1878-80 and 1919. The Red Army did in the space of only a few days in December 1979.

The problem has never been defeating Afghanistan, it has always come from trying to stay there and “civilize” or remake the country.

The British tried that in 1839. Three years later, their contingent of 4,500 soldiers and 12,000 support staff in Kabul had been literally wiped out. Only five survivors from all of them ever made it back to Jalalabad.

The entire fiasco and the reasons for it have been memorably recorded in a great work of historical fiction, “Flashman” by the late George MacDonald Fraser.

Later on, the Soviet Red Army tried remaking the place from 1979 to 1987. The effort completed the bankruptcy of the Soviet Union and led to its collapse.

The lesson was well learned in both Moscow and London.

For all their gung-ho derring-do, the British Indian Empire commanders of Churchill’s day never made the mistake their grandfathers did — and that the United States has tried over the past decade. They prudently stayed away from any attempt at nation-building in Afghanistan.

Nor have any Soviet (or Russian) leaders in the past quarter century showed the slightest desire to repeat Leonid Brezhnev’s catastrophic mistake.

President Obama, in announcing the last phases of the U.S. military withdrawal, made clear he had finally learned the same lessons that Britain and the Soviets finally did. The president was right to publicly acknowledge that, after the U.S. withdrawal, Afghanistan will not be a perfect place, and it is not America’s responsibility to make it one.

However, like Richard Nixon in Vietnam, Obama will go down in history as a leader who recognized reality reluctantly and late in the day, instead of making that difficult call at the beginning of his administration, years before.

As for Secretary Clinton, a lot of irony may lie ahead. Imagine that, after she is elected president in 2016 as is still widely expected, she would have to face immediately a serious foreign policy crisis in Afghanistan. That would be a direct consequence of the wrong course of action she urged and saw adopted eight years earlier. But Clio, ancient Greek muse of history, is not easily mocked.

The Afghan people are far more anti-American today than they were at the time of liberation in 2001.

The dream of improving upon Churchill’s performance in Afghanistan was a powerful dream among U.S. neocons.

Defeating Afghanistan is easy, but staying there and trying to “civilize or remake the country is not.

The Afghanistan invasion completed the bankruptcy of the Soviet Union and led to its collapse.

Like Richard Nixon in Vietnam, Obama will be remembered as a leader who recognized reality late in the day.

The Afghan people are far more anti-American today than they were at the time of liberation in 2001.

The dream of improving upon Churchill’s performance in Afghanistan was a powerful dream among U.S. neocons.

Defeating Afghanistan is easy, but staying there and trying to “civilize or remake the country is not.

The Afghanistan invasion completed the bankruptcy of the Soviet Union and led to its collapse.

Like Richard Nixon in Vietnam, Obama will be remembered as a leader who recognized reality late in the day.

Liberalism in the Arab World?