Are human brains hardwired to recognize some groups of people as friends and others as enemies? 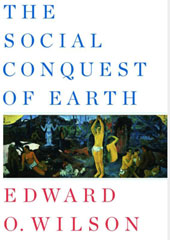 Learn more about The Social Conquest of Earth at Amazon.com. 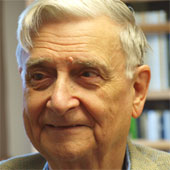 People must have a tribe. It gives them a name, adding to their own and social meaning in a chaotic world. It makes the environment less disorienting and dangerous. The social world of each modern human is not a single tribe, but rather a system of interlocking tribes.

People savor the company of like-minded friends, and they yearn to be in one of the best — perhaps an elite college or the executive committee of a company, a religious sect, a fraternity, a garden club. The goal is to belong to any collectivity that can be compared favorably with other competing groups of the same category.

People around the world today have grown ever more cautious of war and are fearful of its consequences. They have turned increasingly to its moral equivalent in team sports. Their thirst for group membership and superiority of their group can be satisfied with victory by their warriors in clashes on ritualized battlefields.

Like the cheerful and well-dressed citizens of Washington, D.C., who came out to witness the First Battle of Bull Run during the Civil War, people now anticipate the experience of a battle of the Washington Redskins on the football field with relish. The same applies to Arsenal of London, Real Madrid or Bayern Munich.

Experiments conducted over many years by social psychologists have revealed how swiftly and decisively people divide into groups, and then discriminate in favor of the one to which they belong.

Even when the experimenters created the groups arbitrarily, then labeled them so the members could identify themselves, and even when the interactions prescribed were trivial, prejudice quickly established itself.

Whether groups played for pennies or identified themselves in a group-based manner, say, preferring some abstract painter to another, the participants always ranked the out-group below the in-group. They judged their “opponents” to be less likable, less fair, less trustworthy, less competent.

The prejudices asserted themselves even when the subjects were told the in-groups and out-groups had been chosen arbitrarily.

In one such series of trials, subjects were asked to divide piles of chips among anonymous members of the two groups, and the same response followed. Strong favoritism was consistently shown to those labeled simply as an in-group, even with no other incentive and no previous contact.

In its power and universality, the tendency to form groups and then favor in-group members has the earmarks of instinct. It could be argued that in-group bias is conditioned by early training to affiliate with family members and by encouragement to play with neighboring children.

But even if such experience does play a role, it would be an example of what psychologists call prepared learning, the inborn propensity to learn something swiftly and decisively.

If the propensity toward in-group bias has all these criteria, it is likely to be inherited and, if so, can be reasonably supposed to have arisen through evolution by natural selection. Other cogent examples of prepared learning in the human repertoire include language, incest avoidance, and the acquisition of phobias.

Groupism — the elementary drive to form and take deep pleasure from in-group membership — easily translates at a higher level into tribalism.

People are prone to ethnocentrism. It is an uncomfortable fact that even when given a guilt-free choice, individuals prefer the company of others of the same race, nation, clan, and religion.

They trust them more, relax with them better in business and social events, and prefer them more often than not as marriage partners. They are quicker to anger at evidence that an out-group is behaving unfairly or receiving undeserved rewards. And they grow hostile to any out-group encroaching upon the territory or resources of their in-group.

When in experiments black and white Americans were flashed pictures of the other race, their amygdalas, the brain’s center of fear and anger, were activated so quickly and subtly that the conscious centers of the brain were unaware of the response. The subject, in effect, could not help himself.

When, on the other hand, appropriate contexts were added — say, the approaching black was a doctor and the white his patient — two other sites of the brain integrated with the higher learning centers, the cingulate cortex and the dorsolateral preferential cortex, lit up, silencing input through the amygdala.

Thus, different parts of the brain have evolved by group selection to create groupishness. They mediate the hardwired propensity to downgrade other-group members, or else in opposition to subdue its immediate, autonomic effects.

There is little or no guilt in the pleasure experienced from watching violent sporting events and war films, providing the amygdala rules the action and the story unwinds to a satisfying destruction of the enemy.

We would be well advised not to belittle this inclination. It may seem trivial, but shifting tribal instincts from the very real battlefield of war and mutual human destruction to sports arenas and video games actually represents civilizational progress.

People in one study ranked the out-group below the in-group, judging them less likable, fair and trustworthy.

Groupism, the deep social drive to from groups, easily translates at a higher level into tribalism.

People prefer, trust and relax in the company of others of the same race, nation, clan and religion.

People in one study ranked the out-group below the in-group, judging them less likable, fair and trustworthy.

Groupism, the deep social drive to from groups, easily translates at a higher level into tribalism.

People prefer, trust and relax in the company of others of the same race, nation, clan and religion.

The U.S. Democrats as a Conservative Party