The consequences of the lengthy failure of the United States to address Afghan corruption. 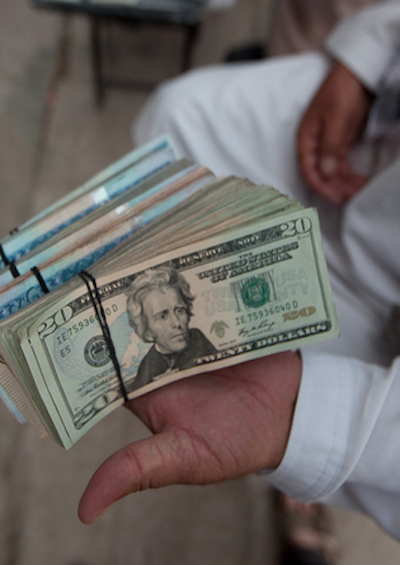 The United States has spent $104 billion on reconstruction in Afghanistan over the last 13 years. Approximately $62 billion of this total has been used to support the Afghan National Security Forces (ANSF).

Nobody knows how much of this U.S. taxpayer cash has been stolen. Nobody seems to be confident that the U.S.-funded programs can be sustained as the U.S. winds down its Afghan engagement.

At the end of 2014 – in a few days’ time – U.S. combat operations in Afghanistan will officially end. John F. Sopko, Special U.S. Inspector General for Afghanistan Reconstruction (SIGAR), recently noted that more than 10,000 U.S. military personnel will remain, but in a training and support role.

He is worried that, despite the vast aid provided by the United States to help Afghanistan build a democratic and secure nation, the massive effort will unravel.

It will cost the Afghan government billions of dollars annually to maintain its army and police force.

In addition, it has to finance essential energy infrastructure, to run the key governmental departments and to continue many of the projects funded by the U.S. and other Western countries.

Sopko states that total government revenues amount to just about $2 billion a year – far, far less than is essential. Vast amounts of foreign aid will have to be raised for years to come to keep ANSF and the government going.

I asked Sopko how much of the $104 billion in reconstruction funds has gone missing (and where it has gone). He replied, “It is impossible to provide an exact figure. The total runs into billions and billions.”

“There is not even a database that has tracked all the contracts that have been concluded even though the United States has been in the country for 13 years – this is horrible.

It is every Afghan’s dream to get this money out of the country. We just cannot lose this amount of money again, the American people will not stand for it.”

No transparency, no stability

Afghans have long been worried about corruption at every governmental level in the country. But until recently top U.S. foreign and defense policy officials have not taken it seriously. They have always placed the goal of stability in Afghanistan above all other issues.

These U.S. officials have long refused to accept – and many of the current leaders of the U.S. foreign policy establishment still refuse to accept – that in countries like Afghanistan and Iraq there can be no sustainable stability without accountable and transparent governance.

This is not a matter of options. Building good governance has to be fully embedded into security and stability programs – this a critical lesson to be drawn from the massive U.S. engagement in both Afghanistan and Iraq.

The long-dominant notion at the Pentagon and the National Security Council – that you have to have order and stability first, and then you can work on corruption and good governance – has contributed to Afghanistan’s bleak prospects today.

U.S. official actions have often added to the corruption problem in Afghanistan.

Too frequently, USAID, the State Department as well as military and intelligence officials have paid Afghan officials and businessmen handsomely for all manner of favors, splashing cash around and infrequently auditing such outlays.

Such conclusions are drawn from a series of reports by SIGAR, most notably one on “High-Risks” in mid-December 2014, together with a landmark report by the Department of Defense earlier this year.

The lesson of Iraq

Confidence in the outlook might be greater were it not for two startling situations: First is the catastrophic example of what has happened to the military in Iraq. Second is the depressing catalogue of abuse found in the regular reports published by Sopko’s office.

On the first point, the United States spent approximately $25 billion building the military in Iraq. Then when ISIS invaded Mosul last June, the Iraqi soldiers ran away.

The generals had stolen funds slated for the rank and file’s pay, while American military equipment had been sold off with the proceeds pocketed by officers and their cronies.

Could the same happen in Afghanistan? Sopko is not about to give a negative answer, but he is worried.

There is also the enormous toll taken in Afghanistan by the combination of waste, inefficiency and corruption that has characterized so much of the U.S.-funded program.

For example, SIGAR said it reviewed a U.S.-funded program to provide literacy training in the Afghan army.

SIGAR concluded that “despite a $200 million military literacy-training contract, no one appeared to know the overall illiteracy rate of the ANSF…there was no ability to measure the effectiveness of the literacy training program and determine the extent to which overall literacy of the ANSF has improved.”

Sopko is not the first to draw attention to inadequate auditing of U.S. reconstruction programs.

But Sopko is the first to say that corruption in Afghanistan is a topic to which the U.S. State Department and Department of Defense officials, alongside the military, assigned a low priority for far too long.

It has taken too many years for U.S. military leaders to come to understand how costly their approaches have been.

A Department of Defense analysis published earlier this year, in response to a call in March 2013 by General Dunford, commander of U.S. and allied forces in Afghanistan, examined counter/anti-corruption (CAC) operational challenges.

The Joint and Coalition Operational Analysis, a division of the Department of Defense, concluded with two key findings:

1.The United States’ initial support of warlords, reliance on logistics contracting and the deluge of military and aid spending overwhelmed the absorptive capacity of the Government of the Islamic Republic of Afghanistan (GIRoA).

2.The necessary preconditions for combating corruption did not exist. This was due to a delayed understanding of the nature of Afghan corruption, decreasing levels of physical security, lack of political will on the part of both the international community and GIRoA, and lack of effective popular pressure against corruption.

All of that resulted in a large-scale culture  of impunity that frustrated CAC efforts.

One of the critical issues to watch in any country’s reconstruction is the application and development of the rule of law.

Afghans have long seen their judiciary as corrupt. They understand that a system of impunity exists. That, in turn, gives many powerful Afghans a sense that they are above the law.

They can always bribe the courts — if they have not already bought off prosecutors and law enforcement. That is more destructive to the emergence of any semblance of a civil society that can move a country forward than almost anything else imaginable.

To boot, this impunity also enables criminals operating the heroin trade, often in league with corrupt public officials, to pursue their crimes.

A key question today is whether the new government of Afghanistan – alongside U.S. military leaders with their fresh understanding of the importance of the corruption issue – are too late to change Afghanistan’s course.

Tackling impunity will be a formidable challenge. So too will securing foreign aid donor confidence, so that more billions of dollars keep flowing into the Afghan national budget.

Afghanistan, after all, according to the 2014 Transparency International Corruption Perception Index, continues to be ranked among the handful of most corrupt countries in the world.

It will be hard to persuade foreign donors to pour money into a country that currently appears to be a mere stopover en route to Swiss and Gulf bank accounts. But without financial assistance, Afghanistan is unlikely to get very far in the world.

Nobody knows how many billions of US taxpayer dollars in cash have been stolen in Afghanistan.

A system of impunity exists that gives so many powerful Afghans a sense they are above the law.

US State Department and Defense officials assigned Afghan corruption a low priority for far too long.

Nobody knows how many billions of US taxpayer dollars in cash have been stolen in Afghanistan.

A system of impunity exists that gives so many powerful Afghans a sense they are above the law.

US State Department and Defense officials assigned Afghan corruption a low priority for far too long.

Shanghai and China’s Embrace of Creativity