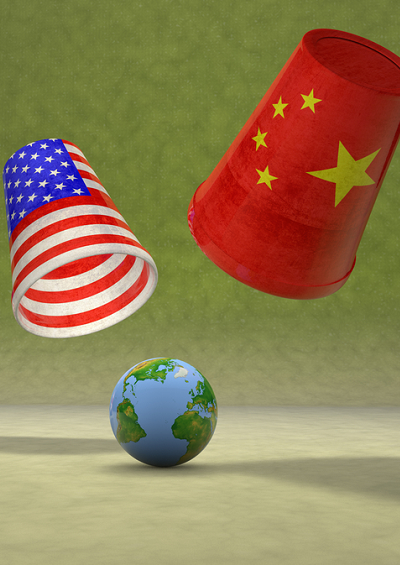 In 2006, China Central Television (CCTV) produced a documentary series entitled “The Rise of the Great Powers.”

For China, the journey started in the early 15th century. That was the extraordinary time of the maritime exploits of the Chinese imperial navy, which occurred under the command of Admiral Zheng He. Back then, it seemed as if China were destined to become the first truly great global maritime power.

In a remarkable turnaround, however, the Ming Emperor Xuande in 1433 forbade any further trips and had the ships destroyed. Instead, by the end of the 15th century, the global Portuguese seaborne empire emerged. China had lost its place as a world-shaping power. Arguably, six centuries later its time has come.

The CCTV series asked a pertinent question: How did the great powers of the past rise?

In the well-researched and cinematographically sophisticated documentary, the inquiry spans the period from the 15th to the 20th centuries in successive chapters devoted to the emerging great powers: first Portugal, followed by Spain, the Netherlands, Britain and France. The last four great powers emerged in the late 19th and early 20th centuries: Germany, Japan, Russia/USSR and the United States.

One inescapable conclusion is that every single rising power of the past achieved its status through wars. The wars generally included plunder, massacre, slavery, rape and pillaging of sacred sites.

Wars also occurred between the great powers – for instance, Britain versus the Netherlands, Germany versus France, or in World War II, Germany and Japan against Britain, Russia and the United States. Or the wars were imperialist, such as Britain’s conquest of India, the opium wars against China or the Boer wars in South Africa.

The United States got to become a great power due to a number of factors that included the slave trade from Africa, the genocide of native American Indians, war against its neighbor Mexico, expansion of hegemonic control over Latin America through the Monroe Doctrine (1823) – and, at the end of the 19th century, the war against Spain which led to the colonization of the Philippines.

Not only did China fail to become the first great global maritime power. It also became instead a plundered target of the great powers.

The “era of humiliation” involved political, military, economic, psychological and cultural humiliation. In the second Opium War, British and French troops destroyed and pillaged the Summer Palace in Beijing – akin to Chinese troops destroying and pillaging the British Museum and the Louvre.

The Japanese committed atrocities during the Pacific War (1937-1945), including the Nanjing Massacre and the lethal experimentation on Chinese civilians of biological and chemical warfare by the Imperial Army’s Unit 731 in Northeast China.

In the decades following World War II, until the mid- to late 1970s, the People’s Republic of China was ostracized from the “international community,” primarily at the insistence of Washington.

Since the turn of the 21st century, China has been back in the international community (i.e., it became a member of the WTO in 2001). It is now well on its way to becoming the world’s next great power.

Therefore, history presents a number of factors that give one pause:

1. The undoubted historical pattern of the correlation between rising great power status and warfare.

2. The understandable sense of bitter revenge many Chinese feel from the humiliations and atrocities perpetrated by some of the great powers in the past.

4. The geopolitical fault-lines, including numerous territorial disputes, in the Asia Pacific region and especially the East and South China Sea.

Considering those factors, it would seem almost inevitable that China’s rise to great power status will, as in the case of the nine preceding rising great powers, involve war. After what happened in the 20th century, that is a truly cataclysmic perspective.

It has been argued – notably by Zheng Bijian in “China’s Peaceful Rise to Great Power Status” – that China’s case will be different for a number of reasons.

Although it is now the world’s second-biggest economic power, China still has a relatively poor population. Thus, priority must be given to domestic development, as opposed to external expansion.

Though it may appear formidable due to its sheer size, China remains a fragile great power. For example, it has 18% of the world’s population, but only possesses 7% of the world’s arable land. No wonder food security is a national obsession, as is access to energy.

True as well that China is building up its military and especially its naval capability. But it will be decades before it is anywhere near competing with the United States.

A narrative of war or peace?

Those are important considerations. But they do not necessarily mean that war is impossible – all the more so as we know from history that the outbreak of wars does not follow logic.

In addition, different logics may apply from different perspectives. Imagine, for example, that the Chinese feel constrained by the United States and its allies in its rise as a great power and what it sees as its legitimate aspirations. Under those circumstances, China may feel impelled to act what it considers defensively before it becomes even more constrained.

Whether China’s rise to great power status turns out to be a narrative of war or peace will depend on two factors — internal Chinese political dynamics and how the outside world reacts and adjusts to China’s rise.

So far, the record is not especially encouraging. To anybody who even knows just a little bit of history, the Western preaching to the Chinese about “international standards” and the “importance of rules” must smack of unbelievable hypocrisy in light of past acts. What rules did the West and Japan adhere to when plundering China?

The challenge for Washington especially, but also for London, Paris and Tokyo — all China’s imperialist predators in its quite recent past — is not how to contain China’s rise, but how to engage China constructively. In so doing, one must recognize that China harbors a justifiable grudge. Amends, not sermons, are in order.

To escape the bellicose syndrome of the rising powers of the past, in particular the 19th and 20th centuries, we all have to work arduously to create a new paradigm, one in which, for the first time in history, a great power will rise peacefully. It won’t be easy, but we have to try!

We have to work so that, for the first time in history, a great power rises peacefully.

Message to Washington: The challenge is not how to contain China’s rise -- but how to engage it constructively.

The West must recognize that China harbors a justifiable historical grudge. Amends are in order.

Back in the early 15th century, it seemed as if China would become the first truly great global maritime power.

Six centuries ago, China lost its place as a world-shaping power. Arguably, now its time has come

We have to work so that, for the first time in history, a great power rises peacefully.

Message to Washington: The challenge is not how to contain China’s rise -- but how to engage it constructively.

The West must recognize that China harbors a justifiable historical grudge. Amends are in order.

Back in the early 15th century, it seemed as if China would become the first truly great global maritime power.

Six centuries ago, China lost its place as a world-shaping power. Arguably, now its time has come