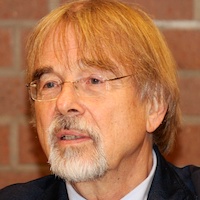 Gunnar Heinsohn is a sociologist and economist by training and lived in Gdansk, Poland. From 1984 to 2009, he was a tenured professor at the University of Bremen.

From 1993 to 2009, Heinsohn founded and headed the Rafael Lemkin Institute at the University of Bremen, Europe’s first academic body for comparative genocide research.

In that capacity, he authored the first encyclopaedia of genocide (“Lexikon der Völkermorde”), as well as a proposal for an international body to monitor genocidal emergencies globally.

His study “Sons and World Power: Terror in the Rise and Fall of Nations (Söhne und Weltmacht, 2003; new edition 2019) highlights the pivotal role of youth bulges in mega-killings of past, present and future.

Since 2005, he has lectured on this subject at universities and at institutions such as the German Bundesakademie für Sicherheitspolitik (BAKS).

In 2011, Heinsohn introduced the subject of war demography into the master courses of NATO Defense College in Rome and taught the course until 2020.

The international community should pay much closer attention to the completely perverted reasoning behind Putin calling for a "de-Nazification" of Ukraine.

Putin’s Pipedream and the Laws of Demography

What should the West do? Ukraine’s tough cards fighting Putin, why Russian mothers worry and the proper lessons from German history.

Theresa May: The Lady Who Loves Nuclear Submarines

An amazing turn in Britain’s post-EU strategy by Britain’s next “Iron Lady.”