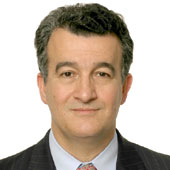 Rogerio Studart is a Nonresident Senior Fellow at Brookings Institution, a Senior Visiting Scholar at Boston University and a Distinguished Fellow at the Global Federation of Competitiveness Councils.

He is a member of the Committee on Development Effectiveness Sub Committee, chairman of the G-24 (since October 2009), and represents Brazil at the IDA-16 Replenishment meetings.

As executive director, Mr. Studart was a member of the Budget and the Personnel Committees and Chairman of the Ad-Hoc Committee on Rules for the 2008 Regular Election of Bank and MIGA Executive Directors. He also served as vice-chairman of the G-24 from March 2008 to October 2009.

Mr. Studart participated in various meetings of the UN General Assembly on trade and financing for development and represented Brazil at the meetings leading to the IDA-15 Replenishment as well as at the G-20 Working Group IV.

Earlier in his career, Mr. Studart held positions with UNECLAC, UNCTAD, the Brazilian Institute of Statistics and Geography (IBGE) and Chase Manhattan Bank in Brazil.

He is an economist by training and holds a Ph.D. from the University of London. He has published books and articles on macroeconomics, finance and development finance. He also holds a professorship with the Institute of Economics at the Universidade Federal do Rio de Janeiro.

Is the new US President really trying to resolve the competitiveness challenge by relying on outdated 1960s style, Brazilian economic concepts?

Brazil and the United States: So Different, Yet So Similar

Brazil, the new host of the World Cup, shares a great deal of values with the United States.

Brazil and the Global Battle to Eliminate Extreme Poverty

Is Latin America's largest country providing a global model for how to reduce poverty in lean budgetary times?