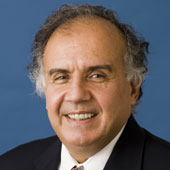 Uri Dadush is a Senior Fellow at the Policy Center for the New South and a Non-Resident Scholar at Bruegel. He is also Principal of Economic Policy International, LLC, providing consulting services to international organizations as well as corporations.

Mr. Dadush is based in Washington, D.C. and teaches international trade policy at the School of Public Policy at the University of Maryland and a course on globalization and development in the executive education program of the Ecole des Hautes Etudes Commerciales (HEC) and the Mohammed VI Polytechnic.

He is also a co-chair of the Trade, Investment and Globalization Task-Force of the T20. He was Vice-Chair of the Global Agenda Council on Trade and Investment at the World Economic Forum.

His books include “WTO Accessions and Trade Multilateralism” (with Chiedu Osakwe, co-editor), “Juggernaut: How Emerging Markets Are Transforming Globalization” (with William Shaw), “Inequality in America” (with Kemal Dervis and others), “Currency Wars” (with Vera Eidelman, co-editor) and “Paradigm Lost: The Euro in Crisis.”

Based previously in London, Brussels, and Milan, he spent 15 years in the private sector, where he was President of the Economist Intelligence Unit, Group Vice President of Data Resources, Inc., and a consultant with Mc Kinsey and Co.

Can the Emerging Economic Powers Govern the Globe?

Can a G7 dominated by developing nations provide the impulse to global governance as did the old G7? The answer is no.

The Global Economy in 2014: An Uneven Recovery

What is the 2014 outlook for economies around the world?

What are the potential consequences of increasing income inequality in the world's largest economy?