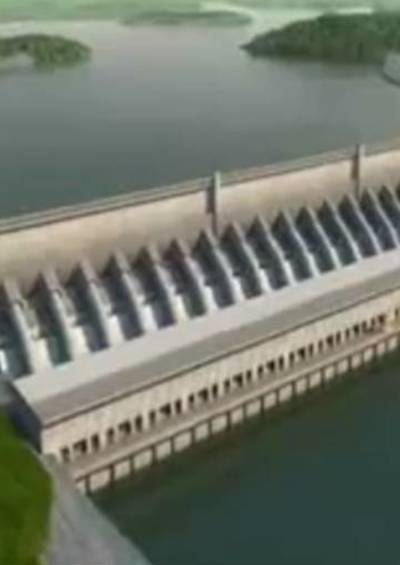 Philip Fearnside is a research professor at Brazil’s National Institute for Research in Amazonia (INPA).

Brazil’s government wants to build dams in Amazonia with “big reservoirs.” That is quite a point of departure compared to the run-of-river dams that have dominated the country’s planning and construction activity over the last two decades.

Moreover, the September 2016 announcement by the National Agency for Electrical Energy (ANEEL) runs directly counter to the December 2015 Paris commitments.

They call for holding average global temperatures to a level “well below” a point 2°C above the average prior to the industrial revolution, and to “work towards” holding the temperature at no more than 1.5°C above the pre-industrial average.

The reason why tropical hydroelectric dams, especially those with large reservoirs, undermine those goals is because they emit methane (CH4).

As the water stratifies into separate layers by temperature, this leaves water at the bottom without oxygen. As a result, the decomposition of organic matter cannot form CO2, and must end by producing CH4 instead.

Another source of emission from reservoirs is carbon dioxide released by decay of the trees killed when the reservoir is filled, whether they have been left projecting out of the water or have been removed to another location.

An example is the Santo Antônio Dam, which blocked Brazil’s Madeira River in 2011. Other environmental impacts are also greater with big reservoirs, including human displacement and the loss of forest and biodiversity.

The Paris accords change many aspects of the efforts to combat global warming. Actions will have to be taken in the next 20 years if average global temperature is to be prevented from passing the agreed limit.

Carbon emissions, uptakes and avoided emissions 80, 90 or 100 years in the future are not relevant. Reservoirs emit large amounts of greenhouse gases in the time window when temperature must be brought under control.

Tropical dams have most of their environmental impact in the first few years after filling a reservoir, when forest trees die and decay and carbon in leaves and soil is transformed into methane at the bottom of the reservoir. The emission continues indefinitely at a lower level after the initial peak.

Carbon emission in the form of methane rather than CO2 further worsens the impact of dams under the Paris accord because the impact of this gas is concentrated in the time window for achieving the target.

Each ton of methane has an impact on global warming about 200 times that of a ton of CO2 while it remains in the atmosphere, but methane remains for a relatively short time (12.4 years on average), whereas CO2 remains about ten times longer.

An appropriate choice of the conversion to express the impact of methane in terms of CO2-equivalents (the “global warming potential,” or GWP) is essential to achieving the Paris accords.

If one uses a 100-year time horizon for the GWP, each ton of methane has the impact of 34 tons of CO2 on global warming. There is much talk of using 28 as the GWP for methane, which is the 100-year value without feedbacks.

However, these feedbacks are part of the real climate system, as recognized in the IPCC’s most recent Assessment Report (the AR-5).

If diplomats are serious about the Paris accords (an important caveat), then the GWP to be used for methane is 86 (the IPCC’s 20-year value with feedbacks), and the impact of Amazonian hydroelectric dams is triple what is implied by the lower GWP values that many diplomats would like to adopt.

What dams are we talking about here? Much of what one often hears about greenhouse gas emissions from dams being minimal is based on the world’s existing dams with measurements of emissions.

The existing dams are preponderantly outside of the humid tropics, and among existing dams most data are from those in non-tropical regions.

In Brazil, plans for future large dams are preponderantly in Amazon rainforest, where emissions are higher than in locations outside of the humid tropics due to Amazonia’s high biomass and warm climate. Studies in several Amazonian reservoirs show high emissions.

The elephant in the room

The Babaquara Dam (officially renamed the “Altamira Dam”) is the elephant in the room. This dam would have a huge reservoir: 6140 km2 if built as originally planned, or twice the area of Brazil’s notorious Balbina Dam.

Most of the Babaquara reservoir would be on Indigenous land, and all in tropical rainforest. The dam would be upstream of the Belo Monte Dam, which blocked Brazil’s Xingu River in 2015 and is expected to have installation of its 11,233 MW of turbines completed by 2019.

A matter of false advertising?

The problem is that there isn’t enough water in the Xingu River to run many of these turbines for much of the year, and for three months there isn’t even enough flow to run a single turbine in the main powerhouse with 11,000 MW.

This is based on the historical waterflows in the Xingu River, but studies have shown that this flow will be substantially less if deforestation and climate change continue as projected.

Storing water in upstream dams (originally planned to total five) would be necessary to run these turbines for a longer period in the year, with a large impact on the Belo Monte Dam’s financial viability.

Belo Monte has been shown to be financially unviable without upstream dams, but it was built anyway with 80% of the funding from subsidized financing from BNDES, Brazil’s National Bank for Economic and Social Development.

Plans for Babaquara were publically acknowledged until July 2008, when the National Council on Energy Policy (CNPE) issued a resolution stating that Belo Monte would be the only dam on the Xingu River.

However, this council is mainly composed of ministers who change with each presidential administration, and the members are already not those who were present in 2008. The council is free to change its mind whenever it wants.

Since turbines are the most expensive part of a hydroelectric dam, placing over 11,000 MW of capacity in a run-of-river dam without sufficient river flow to use most of the turbines for much of the year makes the dam economically unviable.

This represents a constant temptation to build environmentally and socially disastrous storage dams with large reservoirs upstream, beginning with Babaquara.

The theory that Belo Monte would be the only dam on the Xingu River, known as the “institutionalized lie” to Belo Monte opponents, was the justification for excluding any consideration of upstream dams in the environmental impact studies for Belo Monte.

Calculations show that Babaquara would result in massive emissions of greenhouse gasses.

Recognition of the full impacts of Amazonian hydroelectric dams, including their greenhouse gas emissions and their other environmental and social impacts, is essential to rational decision making on energy development and on strategies to mitigate climate change.

Proper accounting for the global-warming impact of dams and the methane they produce is necessary for meeting the objectives agreed in Paris. Brazil’s recently announced priority switch to dams with “big reservoirs” is a blow to these efforts.

Philip Fearnside is a research professor at Brazil’s National Institute for Research in Amazonia (INPA).