Dateline New York: A Lesson from 9/11

What is the only sure way to defeat terrorism in the United States and abroad? 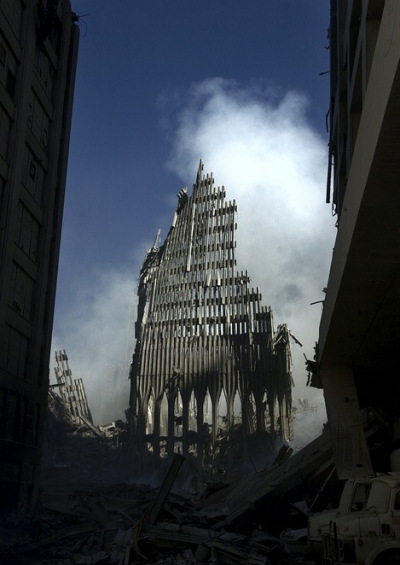 “To me, it means that it will bring life back to that horrible, horrible, tragic site. All we think about when we see Ground Zero is death and destruction. Except for tomorrow, when we'll talk about life, renewal and rebirth," said Ronaldo Vega, design director for the 9/11 Memorial and Museum. He was referring to a group of trees (400 swamp white oaks and sweet gums) that were planted at that tragic place.

Since I live a few blocks away from Ground Zero, I still remember that terrible day, when all our lives were changed forever. I was inside my apartment when I heard shouts and cries from the street below. "Oh, no, no, NO!" "Oh my God!" were the repeated cries.

I rushed downstairs (I had been watching on TV what happened after the first plane hit the towers) — and heard that a second plane had struck.

Together with other bystanders, I rushed towards the site. On the way, we ran into a large group of people rushing back shouting, "Go back, go back, for God's sake, go back!"

We turned around — only to learn that this had been a false alarm and no further attacks were happening. Without exactly understanding what was going on, I still remember the feeling that a relatively peaceful way of life was being replaced by a darker, more sinister one. A feeling of tremendous sadness invaded me.

Shortly afterwards, we learned the details of what had happened, and we heard the stories and saw the images of those jumping voluntarily to their certain deaths — rather than being trapped in a wall of flames inside their offices.

And as we learned of the heroic behavior of hundreds of firefighters who had risked — and many of them lost — their lives, we also learned of the harrowing stories of some of those who died there.

One of them, the son of a friend, who just had enough time to call his brother and tell him, "Please tell Mom and Dad that I love them a lot as I love you," before communication was cut off.

Or the employee of a big firm who left the towers, called his wife to tell her that he was OK after the first plane hit, came back to retrieve some documents from his office and died shortly afterwards by the fire that ravaged his office.

On another anniversary of the tragedy, I wonder about what can be learned from it. One of the main lessons is that, as has been shown many times before, violence begets violence. And intolerance begets intolerance. Unless there is a new approach to terrorist actions, we will continue to live under the threat of avoidable acts of terror.

To stop terrorism, it is important to address the root causes — rather than what we imagine is behind those actions. To pretend that terrorists attack us because they are envious of democracy or of the American way of life is nothing short of naïve.

Terrorists attack us because of the shortcomings of Western powers' — notably the United States’ — foreign policy. Just as we would not admit foreign troops into our country, people from other countries do not willingly accept the presence of foreign troops in their country. This has been repeatedly demonstrated in the case of Afghanistan and Saudi Arabia.

In New York, intolerance is shown by the widespread negative reaction to building a community center, including a mosque, near Ground Zero. A recent fire — reportedly arson — at a planned Islamic center in a Nashville, Tennessee, suburb is an expression of a climate of hatred and intolerance that will increase animosity among religious groups and unnecessarily increase fear, fueling new terrorist acts.

It is critical to develop approaches that increase goodwill among nations and opposing groups. President Barack Obama has wisely refused to continue the vocally aggressive approach of his predecessor.

But more than that is needed. Dialogue is a pre-condition for understanding. We have hardly begun to explore opportunities for civil conversation with other nations, particularly Islamic nations.

Unless Americans show tolerance and a willingness to listen, the dark cloud of misunderstanding and violence will continue to exert its negative presence in our lives.

Acceptance of an Islamic cultural center near Ground Zero, the current graphic symbol of hatred and violence borne of misunderstanding, would be visible proof that we want to move beyond pain, hatred and the cycle of violence.

Ground Zero would then become not a self-defeating shrine to the memory of terrorism, but a testament to the willingness to rebuild a new reality based on religious and cultural tolerance.

To pretend that terrorists attack us because they are envious of democracy or of the American way of life is nothing short of naïve.

I still remember the feeling that a relatively peaceful way of life was being replaced by a darker, more sinister one.

To pretend that terrorists attack us because they are envious of democracy or of the American way of life is nothing short of naïve.

I still remember the feeling that a relatively peaceful way of life was being replaced by a darker, more sinister one.

The Persistent Problem of Domestic Violence in China