Just the Facts: Where China Beats the Entire World 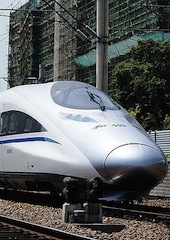 1. China’s first high-speed train connected Beijing with the nearby port of Tianjin in 2008.

3. In a time span of just five years, China’s high-speed train network has grown to be larger than that in all of Europe, which got its start in 1981 in France.

5. In December 2012, the latest section was opened, connecting 2,400km from Beijing to Shenzhen, on the border with Hong Kong.

6. Skeptics had believed there would not be enough demand and that the network would mostly serve political prestige purposes.

7. China’s high-speed trains carry almost 2 million people daily, which is about one-third of the total number of the country’s rail passengers.

From Faster than a speeding bullet (The Economist)

China has built more high-speed rail in just five years than all of Europe in 32 years.

China has built more high-speed rail in just five years than all of Europe in 32 years.

The Case for President Warren