Is Europe's Past Its Future? 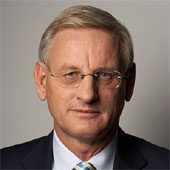 Foreign Minister of Sweden Carl Bildt has served as Sweden’s foreign minister since October 2006. He was the country’s prime minister from 1991 to 1994. During his tenure as prime minister, Mr. Bildt negotiated Sweden’s accession to the European Union, an agreement he signed in June 1994. He also undertook far-reaching liberalization and structural reforms […]

In August 1914, looking out over the grounds of Horseguards Parade in London, then-Foreign Secretary Sir Edward Grey said that "the lamps are going out all over Europe. We shall not see them lit again in our lifetime." His words were prophetic.

The so-called Great War destroyed one empire after the other — the German, Russian, Austro-Hungarian and the Ottoman one.

And it paved the way for turmoil and revolution, inflation and depression, fascism and communism, murder and genocide, partition and repression in a tragedy that lasted for nearly a century.

It was not until November of 1989 that the lights started to be lit again. Not only in a part of Europe — but in the whole of Europe.

The long dark night was finally over. And in the months that followed, history truly accelerated. Germany was peacefully reunified within less than a year.

Jubilant people brought independence, freedom and democracy to one country after another that had been trampled down behind that famous Iron Curtain from — in the words of Winston Churchill — Stettin to Trieste.

The task that was then given to all of us Europeans was to build a new system of peace and stability for Europe as a whole.

And also not for a Europe divided into opposing military alliances — as after 1945. All of these alternatives were either not available — or not acceptable.

The only alternative that could bring peace and stability was the gradual building of a federation of nation states — encompassing the area between the Atlantic and Russia, the Arctic Ocean and the Mediterranean.

Decaying socialism had left fragile societies in its wake, open for temptations and emotions we have seen much too often in the history of Europe.

But it was these peoples' dream of — and determination to — returning to a Europe they so brutally had been cut off from that energized them.

And this energy gave the gigantic process of the economic, social and political transformation of these countries the direction and drive that will now make it possible for them to join the European Union.

What lies ahead? Often, the mission of European integration is described in terms of recreating the empire of Charlemagne.

To this day, the statesmen of Europe still go to Aachen to be awarded for their contributions to the common cause of European integration.

But the old Frankish Empire is far too limited a vision for the Europe it is now our vision of creating. We have already overcome Verdun — and the other fruitless battles of the 20th century.

Now, the task ahead is to overcome the lingering consequences of the division that occurred as far back as AD 286.

Back then the Roman Empire split into its Eastern and its Western parts. That was followed a while later by the division of the Christian Church in AD 1054 into a Western and an Eastern Church.

And that is where we come full circle to the present. After all, today Christianity meets Islam not only in the lands of southeastern Europe — but increasingly in the suburbs of virtually every major city of Europe.

We have no alternative but bridging that division as well. Ever since the momentous events of 1989, we are well beyond the Europe of Charlemagne. Our vision for the future can no longer be the re-creation of Aachen — that is, some latter-day Franco-Germanic empire.

Perhaps our daring vision for the future should be a re-creation of Constantinople, helping to merge cultures that currently seem dangerously — and all too strictly — separated from each other.

Foreign Minister of Sweden Carl Bildt has served as Sweden’s foreign minister since October 2006. He was the country’s prime minister from 1991 to 1994. During his tenure as prime minister, Mr. Bildt negotiated Sweden’s accession to the European Union, an agreement he signed in June 1994. He also undertook far-reaching liberalization and structural reforms […]