A Modest Proposal to Save Detroit

Why not create a national park in Detroit dedicated to unbridled free-market policies? 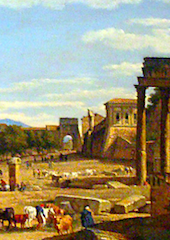 A scene from one of Giovanni Paolo Panini's paintings of the remains of the Roman Forum. Currently owned by the Detroit Institute of Arts.

If a Martian tried to read some of American news headlines in recent years, he might be forgiven for being a little confused. On the one hand, he saw that “Detroit” was saved from bankruptcy by a massive infusion of U.S. government funds. But he also saw that Detroit underwent the largest bankruptcy of its kind in American history.

We know, of course, that in the first instance it was the U.S. automotive industry that was bailed out, while in the second instance, it was the City of Detroit, once the proud hub of that industry, which was not bailed out by the federal government.

The city’s problems are nothing new. Back in the early 1970s, Henry Ford II devised the concept of the Renaissance Center, a complex of office towers, stores and hotels to revitalize Detroit’s decaying downtown. Completed in 1977, it became the headquarters of General Motors, symbolizing a new beginning for the city.

While the fortunes of U.S. automakers went up and down over the ensuing decades, Detroit itself experienced no rebirth, but sank deeper and deeper into the Dark Ages.

By 1989, when Michael Moore’s film “Roger and Me” documented the decline of the nearby town of Flint, Michigan, once the thriving home of the Buick, Detroit was well on its way down as well. It saw very little of the excesses of the dot.com boom in the 1990s or the real estate bubble in the 2000s. Nevertheless, it suffered a crippling crash in the 2008-09 Bush recession.

It’s instructive to take a drive around Detroit’s vacant lots and neighborhoods of gutted homes and to see every other billboard along its highways offer help with personal bankruptcy and foreclosures. Or to walk around its deserted downtown lined with once elegant Art Deco office towers, hotels and apartment buildings now empty and boarded up.

The prestigious Grand Circus Park and Washington Boulevard, the Fifth Avenue of the Midwest, are blighted. The Wurlitzer Piano tower, built in 1926 across from the Detroit Opera House, is abandoned. Quite a few parts of Detroit’s urban landscape bring to mind the Battle of Stalingrad and the Lebanese civil war.

After dark, the city doesn’t light up many neighborhoods in order to save money. Christie’s, the auction house, has put an estimate on every painting in the Detroit Institute of Art in case the collection is liquidated to pay pensions to municipal employees.

The city has so much going for it that to see it in such a dire condition boggles the mind. That art collection is one of the finest in the world, and the city has a world-class opera and symphony orchestra.

Its sports teams also enjoy a loyal following and its hockey franchise, the Red Wings, is the most successful in the United States. One of Detroit’s nicknames happens to be Hockeytown, USA.

Detroit is steeped in history, not just industrial, engineering and economic, but cultural as well. The Motown record label is the grandfather of modern popular music, not only in the United States but around the world. The boarded-up buildings, majestic when they were constructed during the city’s heyday from 1900 to 1940, are an outdoor Art Deco architectural museum.

The people of Detroit are remarkably resilient. They are fiercely proud of their city and retain their unique midwestern cordiality and good manners.

Nevertheless, in the absence of a comprehensive national economic and industrial policy, this storied metropolis that once was home to over one million people, can’t be saved.

That is quite strange, because Detroit’s bread-and-butter auto industry is back: All over Michigan and Ohio, industrial plants are working overtime, churning out car parts and finished vehicles. But Detroit residents have no way of getting to those jobs, as the city is yet again being excluded from another economic boom.

Rather pathetically, a sign on one of the still-occupied buildings on Woodward Avenue encourages American businesses to “Outsource to Detroit.”

But here is an idea: Why not surround the blighted areas of Detroit with a fence and create a theme park dedicated to the unbridled free-market policies pursued by the United States over the past three decades?

It could be called the Voodoo Economics National Park, borrowing the phrase which George H.W. Bush once used to describe his rival Ronald Reagan’s economic policies. It could be a lasting monument to America’s willful neglect of its people, its economic potential and its history.

Actually, in the Detroit Institute of Art there is a painting by the 18th century Italian artist Giovanni Paolo Panini showing a group of tourists promenading around the picturesque ruins of the Roman Forum and enjoying the beauty of Classical art and architecture. In a few years, U.S. tourists too could come to Detroit’s Voodoo Economics National Park to marvel at the bygone splendor of one of America’s greatest industrial cities.

The only difference, of course, is that Rome was destroyed by successive invasions of barbarian hordes, while Detroit has been ruined by Americans themselves.

In Detroit, every other billboard along its highways offer help with personal bankruptcy and foreclosures.

Parts of Detroit’s urban landscape bring to mind the Battle of Stalingrad and the Lebanese civil war.

A Voodoo Economics Park could be a monument to the US’ neglect of its people, economic potential and history.

A sign on one of the buildings on Woodward Avenue encourages American businesses to “Outsource to Detroit.”

In Detroit, every other billboard along its highways offer help with personal bankruptcy and foreclosures.

Parts of Detroit’s urban landscape bring to mind the Battle of Stalingrad and the Lebanese civil war.

A Voodoo Economics Park could be a monument to the US’ neglect of its people, economic potential and history.

A sign on one of the buildings on Woodward Avenue encourages American businesses to “Outsource to Detroit.”

Brazil: Ready for the World Cup?