How can an economy, which represents only 4.9% of global GDP, be so central to the global economic outlook? 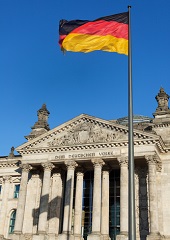 It seems that everyone in the world of economics is picking on Germany these days. Germany, they say, is stalling global growth and leading the European Union into a “triple” dip recession.

Germany, they insist, is strangling the world banking system by insisting on risk measures that force banks to shrink their balance sheets and curtail lending.

Germany, they point out, is using its international economic leverage irresponsibly by insisting on austerity at home and abroad.

In the face of all this criticism, one might feel sorry for poor little Germany — except for one thing. There is more than a little bit of truth in all the criticism.

In fact, looking at the stock market as a leading indicator of global economic risk, one finds that German policy has precipitated serious market downturns in 2011, 2012 and again in 2014.

Eurozone in the lead

You may well ask how an economy, which according to the International Monetary Fund represented only 4.9% (or 1/20th) of global GDP in 2013, can be so central to the global economic outlook.

As a result of its leadership role in the European Union, Germany exerts a global influence far above its actual weight. And therein lies the rub.

Such a role requires international leadership, which has not necessarily been a characteristic of the German economy to date. Since 1950, Germany has pursued what many would describe as a parochial path through global markets.

It has succeeded in export markets, which have served the country extremely well. Meanwhile, it has emphasized maintaining stable monetary and fiscal policies that are suited to the German temperament.

Now, however, Germany confronts a different challenge: It faces responsibilities that extend beyond its own borders and the traditional thinking of its historically inward-looking economic brain trust.

Because of its leadership position in the European economy, Germany-first (or Germany-only) policies — however desirable they may be to the German electorate — are no longer compatible with Germany’s role in the world.

The bottom line here is this: A position of leadership inevitably entails responsibility.

While the Germans are still coming to terms with their global standing, the country’s economy suffered a decline in GDP growth in the second quarter of 2014.

In fact, the German economy is no longer doing what it usually does best — chugging along nicely. Instead, it has started producing startlingly weak early indicators on an almost daily basis.

With its exports down by 5.9% in September and other indicators on Angela Merkel’s economic dashboard flashing red, there is an increasing likelihood that Germany will deal with a second quarter of contraction — in other words, a recession.

At the same time, the export-driven German economy has been Europe’s bulwark against a broad-based meltdown of the Eurozone economy as a whole. Much of Southern Europe remains mired in a slow growth, high unemployment malaise. A healthy German economy has compensated for these deficits within the EU.

But a Germany afflicted with the same malaise will exacerbate the problems that afflict much of the rest of Europe, which in turn will exacerbate Germany’s own problems.

To be sure, geopolitical issues also confound European economies. Progressively aggressive Western sanctions on Russia threaten to cut off a major Western European export market — here too, the emphasis is on Germany.

And against this backdrop, China’s economy, which is also an important export market for European goods and services, is experiencing a slowdown in its rate of growth. In September, the Chinese government had to inject $80 billion into its banking system to provide liquidity it deemed necessary to avoid a slowdown. This month it announced another $40 billion infusion.

The bottom line is that Europe is facing negative growth, deflation and excessively high unemployment — making it a potential economic basket case.

Don’t forget about those pesky banks

At the same time this is taking place, bank regulators around the world are eagerly trying to diminish or eliminate systemic risks that afflict the global banking industry.

New capital and liquidity ratios recommended by the Bank for International Settlements will force the world’s banks to deleverage and pull liquidity from financial markets. This deleveraging will impose a drag on global growth.

At the same time, a raft of national regulation is in the process of being implemented on a multilateral basis. A consequence of the events of 2008, these regulatory imperatives now compensate (and perhaps over-compensate) for the under-regulation that was common globally in the period leading up to the crash.

Either way, this runs the very serious risk of having a chilling effect on risk-taking by financial institutions — and, as a consequence, on economic growth.

Indeed, the mere prospect of over-regulation has already had the effect of diminishing the impact of central bank policy, including that of the U.S. Fed. Remember that furious efforts by the Fed to infuse money into the U.S. economy were thwarted by a banking system reluctant to assume the necessary risks to deploy the cash in the face of tough regulation.

As a result, the money the Fed printed through its various quantitative easing initiatives remained trapped within the financial system. It never made it out into the open spaces of the real economy.

This process of re-regulating the global economy continues to impose a drag on economic growth.

Germany is right, but …

Taken together, this approach is thought to produce a desirable result, banishing inflation to the nether regions of the economy, establishing a stable currency regime and eliminating the potential for shocks to the financial system.

It punishes the profligate and, in so doing, diminishes moral hazard.

As a leader in the global economy, Germany has a distinct responsibility to promote growth globally, not just at home. This responsibility must be weighed against its prerogative to pursue whatever policies it chooses.

Germany cannot have it both ways. It cannot hold sway over the European economy and, at the same time, solipstistically pursue its own parochial interests. It is time for Germany to truly exert a liberal influence in the global economy.

Right now, the ECB needs to loosen monetary discipline and take a more active posture toward promoting inflation and growth. Fiscal policymakers in Germany and France need to adopt a flexible policy of forbearance with respect to its partners in the euro. And Germany needs to show greater flexibility in helping to define a global regulatory regime for financial institutions.

If these things are done, growth will resume and Germany will assume its rightful place among the world’s leading economies.

With all the criticism, one might feel sorry for poor little Germany – except there is more than a little truth in it.

German policy has precipitated serious stock market downturns in 2011, 2012 and again in 2014.

Because of its role in Europe, Germany exerts a global influence far above its actual weight. There’s the rub.

The export-driven German economy has been Europe’s bulwark against a meltdown of the Eurozone economy.

It is time for Germany to truly exert a liberal influence in the global economy.

With all the criticism, one might feel sorry for poor little Germany – except there is more than a little truth in it.

German policy has precipitated serious stock market downturns in 2011, 2012 and again in 2014.

Because of its role in Europe, Germany exerts a global influence far above its actual weight. There’s the rub.

The export-driven German economy has been Europe’s bulwark against a meltdown of the Eurozone economy.

It is time for Germany to truly exert a liberal influence in the global economy.