Public Diplomacy in the 21st Century

What factors need to be considered to explain U.S. policy to audiences abroad?

What factors need to be considered to explain U.S. policy to audiences abroad? 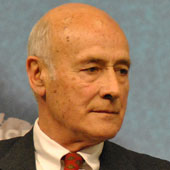 Information is power — and today a much larger part of the world's population has access to that power.

Long gone are the days when small teams of American foreign service officers drove Jeeps to the hinterlands of Latin America and other remote regions of the world to show reel-to-reel movies to isolated audiences.

Technological advances have led to a dramatic reduction in the cost of processing and transmitting information. The result is an explosion of information, one that has produced a "paradox of plenty."

Plenty of information leads to scarcity — of attention. When people are overwhelmed with the volume of information confronting them, they have difficulty discerning what to focus on.

Attention — rather than information — becomes the scarce resource. And those who can distinguish valuable information from background clutter gain power.

Editors and cue givers become more in demand and this is a source of power for those who can tell us where to focus our attention.

In addition, publics have become more wary and sensitized about propaganda. Among editors and opinion leaders, credibility is the crucial resource and an important source of soft power.

Reputation becomes even more important than in the past — and political struggles occur over the creation and destruction of credibility.

Governments compete for credibility not only with other governments, but with a broad range of alternatives, including news media.

Reputation has always mattered in world politics. But the role of credibility becomes an even more important power resource because of the "paradox of plenty."

Information that appears to be propaganda may not only be scorned. It also may turn out to be counterproductive if it undermines a country's reputation for credibility.

Exaggerated claims about the imminence of Saddam Hussein's weapons of mass destruction and the strength of his ties to al-Qaeda may have helped mobilize domestic support for the Iraq War. But the subsequent disclosure of the exaggeration dealt a costly blow to British and American credibility.

Under these new information age conditions of alternative sources of news, increasingly the soft sell may prove more effective than a hard sell.

There are three dimensions of public diplomacy. All three are important — and they require different relative proportions of direct government information and long-term cultural relationships.

The first — and most immediate dimension — is daily communications, which involves explaining the context of domestic and foreign policy decisions.

After making decisions, government officials in modern democracies usually pay a good deal of attention to what to tell the press and how to do it.

But they generally focus on the domestic press — yet the foreign press corps has to be the most important target for the first dimension of public diplomacy.

The second dimension is strategic communication, in which a set of simple themes is developed, much like what occurs in a political or advertising campaign.

The third dimension of public diplomacy is the development of lasting relationships with key individuals over many years through scholarships, exchanges, training, seminars, conferences and access to media channels.

A communications strategy cannot work if it cuts against the grain of policy. Actions speak louder than words — and public diplomacy that appears to be mere window dressing for the projection of power is unlikely to succeed.

Preaching at foreigners is not the best way to convert them. Too often, political leaders think that the problem is simply that others lack information — and that if they simply knew what we know, they would see things our way.

But all information goes through cultural filters and declamatory statements are rarely heard as intended. Telling is far less influential than actions and symbols that show as well as tell.

At the same time, postmodern publics are generally skeptical of authority and governments are often mistrusted.

Thus, it often behooves governments to keep in the background and to work with private actors. Some NGOs enjoy more trust than governments do. And though they are difficult to control, they can be useful channels of communication.

American foundations — such as the Ford Foundation, the Soros Foundation and Carnegie Endowment — and a variety of NGOs played an important role in the consolidation of democracy in Eastern Europe after the end of the Cold War.

In the future, Americans will have to become more aware of cultural differences. To be effective, the United Stated must become less parochial and more sensitive to foreign perceptions.

The first step in making a better case is a greater understanding of how U.S. policies appear to others — and of the cultural filters that affect how others hear U.S. messages.

To put it bluntly, to communicate more effectively, Americans need to listen. Wielding soft power is far less unilateral than employing hard power — and the United States has yet to learn that lesson.

Paris — Capital of the World of World Music