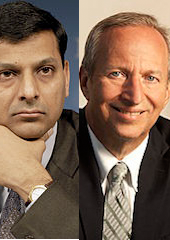 What a difference in the reaction to two candidates slated to take over a key country’s central bank. When Raghu Rajan was appointed to become the new head of the Reserve Bank of India, the verdict was near-universal: an extremely qualified person had been selected for the post. The biggest concern was, and is, whether — given India’s challenges — the tasks ahead are too big for anyone to shoulder successfully.

At the core, though, everybody readily agreed that Rajan is a man with a proven track record when it comes to a central banker’s most important virtue, the willingness to speak truth to power. Rajan demonstrated that ability most prominently a few years back when he singled out the lack of stability of the U.S. financial system, a call highly unpopular with U.S. elites at the time, although entirely on target.

His presumed U.S. counterpart, Larry Summers, hasn’t gotten the official nod yet, although he has received a lot of presidential blessing as the right man for the job. And yet, I wonder. Sure, Summers as an economist is as brilliant as Rajan. Both were star professors in the U.S. economics scene. But in complete contrast to Rajan, Summers has excelled almost exclusively as a propeller and enabler of vested interests. His specialty is not speaking truth to those in power, but rather most agilely further empowering those in power.

In contrast to Rajan, Summers has excelled almost exclusively as a propeller and enabler of vested interests.

In contrast to Rajan, Summers has excelled almost exclusively as a propeller and enabler of vested interests.