Shooting Afghanistan: Beyond the Conflict (II)

How do photographs reveal an Afghanistan of daily life next to and within conflict?

How do photographs reveal an Afghanistan of daily life next to and within conflict? 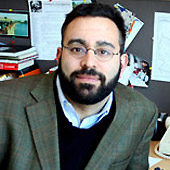 What do photographs reveal about Afghanistan? A photograph is embedded with multiple meanings. However, absent explanatory text, the image tends to confirm existing perceptions. In capturing a singular moment, the image is proposed to reflect broader realities and contain core truths.

A singular image of Afghanistan is said to reveal the reality of a situation in one picture. It has a multiplier effect — producing a belief that the one captured represents the reality of many others.

In war photography, what would be an otherwise commonplace image becomes significant because of location and surrounding event. A family photo becomes art with the addition of pockmarks, graves, tragedy and loss.

Coloring landscapes
When presented in black and white, in pursuit of contrast, drama and artistry, the photograph presents the foreign location as aged and ageless, producing difficulties of situating the photograph and its subjects in both space and time. The locale is proposed as distant, aged and archaic. While color reflects immediacy, black and white threatens to denote art, permanence and age.

These images generally confirm rather than challenge existing assumptions, presenting an Afghanistan of burqa-covered women and turbaned soldiers with ever-present Kalashnikovs, of destroyed buildings and poppy fields. Afghanistan becomes a nation of combatants or a nation of fanatics — the Taliban and the Mujahideen as the perfect representation of society.

No matter the complexity of the individual’s story or his actual affiliation, the photograph of an Afghan with a weapon is proposed as menacing and threatening, and immediately assigned to membership in the Mujahideen and the Taliban.

Diverse histories
My interviews with 345 ex-combatants revealed a diverse series of histories. I talked with individuals negotiating both local and national insecurity and personal needs with broader communal family and tribal obligations.

Meta-accounts of jihad-inspired fanatics or of poppy-funded warlords collapse in these interviews, revealing diverse local histories of participation in conflict. Combatants were also traders, farmers, shepherds, business-owners, and migrant-laborers — and they had conceptions of legitimate and illegitimate fighting.

Breaking misconceptions
The Taliban were less linked to than permitted, and then opposed, by the Pashtun tribal system, particularly after 9/11 when a number of prominent tribes allied with U.S. Operation Enduring Freedom.

Ultimately, when viewing Afghanistan, we tend to fit new pictures within existing frames. A graduate art student’s first reaction to the photograph of Pashtun men at an engagement party was to exclaim — “terrorists.” Whether reflecting humor or immediate reaction, this comment revealed a broader reality.

Even when captured in their most common celebratory moment, most Afghans are symbolically relocated from their own experiences into our own preconceptions. Similarly, images of Afghans with weapons — even if undergoing disarmament — are first interpreted as “dangerous,” with only a modifying caption altering that immediate perception.

Photography and movement
Building on Robert Capa’s statement that “If your pictures aren’t good enough, you’re not close enough,” James Nachtwey, the preeminent photo-realist and conflict photographer, once indicated that the primary characteristic of a good war photographer was proximity, closeness and involvement.

Physical distance would produce emotional distance — and be immediately revealed in the composition and weight of the photograph.

A sheltered existence
In addition to the over 30,000 soldiers deployed to Afghanistan as part of ISAF, NATO and the United States, there are thousands of expatriates in Afghanistan, predominantly concentrated in Kabul.

Yet many foreign “helpers” live sheltered from daily life in Afghanistan — rarely traveling outside of Kabul and only interacting with Afghans as colleagues, servants or beneficiaries. Closeness is prevented by guardposts, compound walls, restaurants and the closed doors of white landcruisers.

For many international staff in Afghanistan, all movement is controlled, as are the abilities to interact and see other parts of Afghanistan. The challenges to closeness are substantial — with both Afghans and expatriates subject to kidnapping and armed attacks.

Soldier’s experience
These tactics were adopted by the insurgents in anticipation of this counter-reaction — pushing internationals further into closed compounds, slowing reconstruction, and removing the potential for local interaction.

Without opportunities to interact, the outside becomes threatening. Once, I arranged to fly by a UK Air Force C-130 to visit the United Kingdom’s Provincial Reconstruction Team in Mazar-i-Sharif.

To do so, I needed to travel between a UK forward base to the Kabul airport in an armored vehicle and in a flak jacket. Traveling this short distance on a well-familiar road allowed me to briefly experience the world of the soldier.

Changed view
The process of strapping on a flak jacket, of sitting within a lightly armored vehicle, of peering outside from its small viewing windows, transformed a daily trip into something more menacing.

Ultimately, “being there” — working in Afghanistan — is not the same as “going out.” During my five research trips to Afghanistan since August 2001 — ranging from one to four months — I have tried to walk as much as possible, both between meetings and on the weekends, also traveling to provinces and regions in order to research conflict dynamics.

This formal and informal wandering opened up a different view of Afghanistan outside of security concerns and meta-descriptions. It revealed an Afghanistan of trade and poverty, of both reconstruction and continued deprivation, of contentious politics and of community reconciliation — and of daily life next to and within conflict.

Shooting Afghanistan: Beyond the Conflict (I)