Do the ghosts of Northeast Asia’s past imperil the region’s future stability and prosperity? 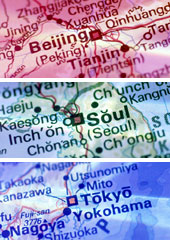 Compared to a half-century ago, a great deal has changed not only in Korea, but in the region of Northeast Asia generally. In 1967, Korea was a poor “basket case” third-world dictatorship. China, meanwhile, was in the early throes of the Cultural Revolution.

Japan, for its part, was resuming its position as a leading regional and world economy. In 1967, it surpassed then-West Germany in terms of the size of its GDP.

It thus became the world’s third-largest economy, after the United States and the USSR. With the collapse of the USSR, Japan moved into second place, a position from which it was only recently dislodged by China.

In many ways, the last 45 years have witnessed some quite astonishing and very positive developments in Northeast Asia (with the notable exception of North Korea).

In other ways, however, the last 45 years have seen no change at all. In fact, one can arguably observe a deterioration. This was brought home to me during a recent trip to Seoul.

I first paid a visit to the Dokdo Museum (Dokdo are the islands contested by Korea and Japan, where they are called Takeshima) and then to the War and Women’s Human Rights Museum, which was established by the Korean Council for the Women Drafted for Military Sexual Slavery by Japan.

In spite of overwhelming evidence, the Japanese government has resolutely refused to accept responsibility for the sexual enslavement of thousands of Korean women (“comfort women”, ianfu in Japanese) by the Japanese military during World War II. In fact, the recently newly elected Japanese Prime Minister, Shinzo Abe, has denied their very existence.

Northeast Asia may have achieved economic prosperity, but peace and cross-cultural understanding still elude it. Even though relations seemed rather smooth for several decades (despite occasional eruptions), the tensions were there, submerged, all along.

In the last few years, those tensions have re-emerged quite stridently. With Greater China (including Hong Kong, Taiwan and the People’s Republic), Japan is also engaged in a major territorial dispute over a handful of islands known in China as the Diaoyu, and in Japan as Senkaku.

The exchange between Japan and China has become increasingly acrimonious. Everywhere in East Asia people are becoming concerned, indeed alarmed.

Though a war between the countries remains implausible at the moment, there is a grave risk that, in what has become a diplomatic minefield, a fuse could be accidentally lit anytime, setting off a violent conflagration.

The problem is the past

On the surface, the Northeast Asian trio should have everything going for close union. China, Japan and Korea are each other’s major trade and investment partners and their economies are highly interdependent.

Furthermore, they share a common culture. All three are Confucianist societies for which the most prized value is “harmony.” Chinese, Japanese and Koreans not only have significant common interests, they should also be able to understand each other on the basis of a common cultural wavelength.

By most accounts, Northeast Asia should be able to look to a bright future. The problem is the past.

In the mid-19th century, as Western imperialism advanced eastwards, China was engulfed by the Opium Wars and subsequent intrusions — and Korea was backward and isolated.

Back then, it was Japan that broke ranks and succeeded to be the only non-Western, industrialized and global military power by the early 20th century. That particular achievement was glorified by becoming an equal ally of Great Britain in the Anglo-Japanese Alliance (1902-22).

In order to achieve greatness, in the words of the title of a famous pamphlet written by the leading intellectual of the Meiji Era (1868-1912), Yukichi Fukuzawa, Japan had to “escape Asia” — Datsu-A, in Japanese.

In 1931, Japan invaded Northeast China and annexed Manchuria. Having terminated the alliance with Britain, it formed an alliance with another Western partner, Nazi Germany.

In 1937, Japan launched a full-scale invasion of China, in the early stages of which the Nanjing massacre occurred (on December 13). That particular event is something that is indelibly imprinted on the Chinese people’s collective mind.

To round out its imperial-wave period, the Japanese empire also expanded south to encompass all of what today are the ASEAN countries, with the exception of Thailand.

Japan was defeated in September 1945. The initial intention of the American occupation was to carry out the three “Ds” — as in demilitarization, de-industrialization and democratization.

With the communist victory in China and the outbreak of the Korean War and the Cold War, American policy underwent a fundamental change, with a new goal of rehabilitating Japan as rapidly as possible.

Decisions were made not to prosecute Emperor Hirohito and to release from prison many of the erstwhile leading figures of the empire and war. These included Nobusuke Kishi, who had been posted to Manchukuo (as the annexed puppet state of Manchuria was called in Japan) in 1935 to oversee the region’s enforced industrial development.

He later served in the wartime cabinet of Hideki Tojo. Rehabilitated by the U.S. occupation forces, Kishi went back into politics to become the Japanese prime minister from 1957 to 1960. Kishi also happens to be the grandfather of current Prime Minister Abe.

And so it was that, in the post-WWII years, Japan went about forming its third alliance with a Western power, this time with the United States. And Emperor Hirohito paid amends to erstwhile Western enemies by making state visits to the United States, the United Kingdom and the Netherlands.

In sharp contrast, he never came clean on Japan’s misdeeds in its own region of Northeast Asia. Not only did he never visit China or Korea, but he did not visit any other Asian country that Japan had invaded.

Datsu-A! Remember the strategy of “escaping Asia?” Well, Japan still clings to this strategy, when it comes to apologizing in a meaningful fashion for its past misdeeds to what are now its key regional partners.

If the Chinese have to contend with notions of overreach in terms of how they are currently playing their cards in the conflicts of the South China Sea, Japan too has to cope with overplaying — although in a far more serious manner.

The ghosts of the past continue to be reflected in Northeast Asia in many ways. Abe, as noted, is the grandson of Kishi. Xi Jinping, the new president of China, is the son of Xi Zhongxun, one of the founders and leaders of the Chinese Communist Party, who was engaged in coordinating policy in fighting against Japan in the 1930s and 1940s.

Meanwhile, Park Geun-hye, the new Korean president, is the daughter of Park Chung-hee, the dictator and architect of Korea’s economic “miracle.”

China, Japan and Korea are respectively the world’s second, third and eleventh biggest economies. They are also major trading and investment powers.

These three nations are, along with Indonesia, a key contingent in the G20. They are situated in a potentially explosive region with a heavy concentration of nuclear weapons. Where there is economic power, there is plenty of potential for military strife.

It is no exaggeration to say that much of the future of the planet will be determined by how things evolve in Northeast Asia. At the moment, prospects are not good.

Until and unless the challenge of the past is met — and the main responsibility lies with Japan to reverse Datsu-A and make peace with its neighbors — the future looks bleak.

This is a matter of grave global concern.

Northeast Asian trio should have everything going for close union. China, Japan and Korea are each already other's major trading partners.

In many ways, mostly material, Northeast Asia has witnessed astonishing progress over the last 45 years.

In other ways, mostly diplomatic and cultural, the last 45 years in Northeast Asia have brought no change at all.

Northeast Asia may have achieved prosperity, but peace and cross-cultural understanding still elude it.

Northeast Asian trio should have everything going for close union. China, Japan and Korea are each already other's major trading partners.

In many ways, mostly material, Northeast Asia has witnessed astonishing progress over the last 45 years.

In other ways, mostly diplomatic and cultural, the last 45 years in Northeast Asia have brought no change at all.

Northeast Asia may have achieved prosperity, but peace and cross-cultural understanding still elude it.

Putting Finance Back in the Box