The Geopolitical Consequences of a New Great Depression

What is at stake if the U.S. and global economies lapse into a sustained depression?

What is at stake if the U.S. and global economies lapse into a sustained depression? 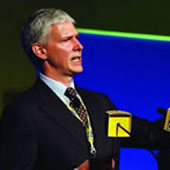 Richard Duncan is the author of three books on the global economic crisis and the publisher of Macro Watch. Follow him at www.richardduncaneconomics.com

With the onset of a new great depression, the first thing to be noticed by Americans is that the U.S. government’s tax revenues would collapse. Next, because global trade would shrivel up, other countries would no longer help finance the U.S. budget deficit by buying government bonds. They would simply no longer have the money to do so.

At present, the “ROW” — or Rest of the World — has a $500 billion annual trade surplus with the United States. The central banks of the United States’ trading partners accumulate that surplus as foreign exchange reserves and invest most of those reserves into U.S. government bonds.

An economic collapse would cause global trade to plummet and drastically reduce (if not eliminate altogether) the U.S. trade deficit. Therefore, this source of foreign funding for the U.S. budget deficit would dry up.

Consequently, the U.S. government would have to sharply curtail its spending both at home and abroad. Domestically, social programs for the old, the sick and the unemployed — never ample — would have to be slashed. Government spending on education and infrastructure would also have to be curtailed.

Much less government spending would result in a dramatic increase in poverty — and, consequently, in crime. This would combine to produce a crisis of the current two-party political system. Astonishment, frustration and anger at the economic breakdown would radicalize politics.

New parties would form at both extremes of the political spectrum. Given the great and growing income inequality going into the crisis, the hungry have-nots would substantially outnumber the remaining wealthy.

Therefore, a hard swing to the left would be the outcome most likely to result from democratic elections. In that case, the tax rates on the top income brackets could be raised to 80% or more, a level last seen in 1963.

On the other hand, the possibility of a right-wing putsch could not be ruled out. During the Great Depression, the United States’ military was tiny in comparison with what it became during World War II and the decades of hot, cold and terrorist wars that followed. In this new great depression, it may be the military that ultimately determines how the country would be governed.

The political battle over America’s future would be bitter, and quite possibly bloody. It cannot be guaranteed that the country’s constitution would survive.

The United States maintains hundreds of military bases across dozens of countries around the world. Added to this is a fleet of 11 aircraft carriers and 18 nuclear-armed submarines. The country spends more than $650 billion a year on its military, if one only counts official expenditures.

If the U.S. economy collapses into a new great depression, the United States could not afford to maintain its worldwide military presence or to continue in its role as global peacekeeper. Or, at least, it could not finance its military in the same way it does at present.

Therefore, the United States would either have to find an alternative funding method for its global military presence or else it would have to radically scale it back. Historically, empires were financed with plunder and territorial expropriation. The estates of the vanquished ruling classes were given to the conquering generals, while the rest of the population was forced to pay imperial taxes.

The United States’ model of empire has been unique. It has financed its global military presence by issuing government debt, thereby taxing future generations of Americans to pay for this generation’s global supremacy. That would no longer be possible if the economy collapsed.

Cost-benefit analysis would quickly reveal that much of America’s global presence was simply no longer affordable. Many — or even most — of the outposts that did not pay for themselves would have to be abandoned.

If international trade broke down, would there be any reason for the United States to keep a military presence in Asia, especially when there was no obvious way to finance that presence?

In a global depression, the United States’ allies in Asia would most likely be unwilling or unable to finance America’s military bases there or to pay for the upkeep of the U.S. Pacific Fleet. Nor would the United States have the strength to force them to pay for U.S. “protection.” Retreat from Asia might become unavoidable.

Should a new great depression put an end to the Pax Americana, the world would become a much more dangerous place. When the Great Depression began, Japan was the rising industrial power in Asia. It invaded Manchuria in 1931 and conquered much of the rest of Asia in the early 1940s.

Would China, Asia’s new rising power, behave the same way in the event of a new global economic collapse? Possibly. China is the only nuclear power in Asia east of India (other than North Korea, which is largely a Chinese satellite state).

However, in this disaster scenario, it is not certain that China would survive in its current configuration. Its economy would be in ruins. Most of its factories and banks would be closed. Unemployment could exceed 30%. There would most likely be starvation both in the cities and in the countryside.

The Communist Party could lose its grip on power, in which case the country could break apart — as it has numerous times in the past. It was less than 100 years ago that China’s provinces, ruled by warlords, were at war with one another.

United or divided, China’s nuclear arsenal would make it Asia’s undisputed superpower if the United States were to withdraw from the region. From Korea and Japan in the North to New Zealand in the South and to Burma in the West, all of Asia would be at China’s mercy.

Hunger among China’s population of 1.3 billion people could necessitate territorial expansion into Southeast Asia. In fact, the central government might not be able to prevent mass migration southward even if it wanted to.

Would Europe hold up?

In Europe, severe economic hardship would revive the centuries old struggle between the left and right. During the 1930s, the Fascist movement arose and imposed a police state on most of Western Europe. In the East, the Soviet Union had become a communist police state even earlier.

The far right and the far left of the political spectrum converge in totalitarianism. It is difficult to judge whether Europe’s democratic institutions would hold up better this time that they did last time.

England had an empire during the Great Depression of the 1930s. Now it only has banks. In a severe worldwide depression, the country — or, at least London — could become ungovernable. Frustration over poverty and a lack of jobs would erupt into anti-immigration riots not only in the UK, but across most of Europe.

As for the rest of the world, its prospects in this disaster scenario can be summed up in a couple of sentences. Global economic output could fall by as much as half, from $60 trillion to $30 trillion. Not all of the world’s seven billion people would survive in a $30 trillion global economy.

Starvation would be widespread. Food riots would provoke political upheaval and myriad big and small conflicts around the world. It would be a humanitarian catastrophe so extreme as to be unimaginable for the current generation, which, at least in the industrialized world, has known only prosperity.

There also would not be any reason to hope that a new great depression would end quickly. Remember, the previous Great Depression was ended only by an even more calamitous global war that killed approximately 60 million people.

Should a new great depression put an end to the Pax Americana, the world would become a much more dangerous place.

The United States' model of empire has been unique. It has financed its global military presence by issuing government debt.

It is not certain that China would survive. Its economy would be in ruins, and there be starvation in the cities and the countryside.

Richard Duncan is the author of three books on the global economic crisis and the publisher of Macro Watch. Follow him at www.richardduncaneconomics.com

Should a new great depression put an end to the Pax Americana, the world would become a much more dangerous place.

The United States' model of empire has been unique. It has financed its global military presence by issuing government debt.

It is not certain that China would survive. Its economy would be in ruins, and there be starvation in the cities and the countryside.