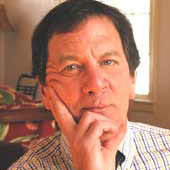 Go to Iran and look — and listen — closely enough. You will discover a phenomenon that can tell you something important about our age.

Iran is a land where more than half the population was born after the Islamic revolution in 1979.

And yet, you will find that not far beneath the surface, there is a powerful nostalgia for Mohammed Mossadeq, the secular prime minister deposed in a U.S.-backed coup in 1953.

The question is not why or how a nation whose population is so young could cultivate its memories of a leader whom most inhabitants could not possibly remember personally.

The question is why one finds the very same preoccupation with former leaders (and supposedly of ill repute) so often — and in so many other places in the developing world today.

In Guatemala, there is a similar reverence for Jacobo Arbenz, the country's elected president until the Central Intelligence Agency organized a coup to unseat him in 1954. In fact, the U.S.-engineered coup in Iran became the model for the Arbenz operation a year later.

In India, independence leader Jawaharlal Nehru remains a hero for many — even as the nation struggles to evolve beyond the Fabian socialism that served as the foundation of his ideas.

The list goes on. In Ghana, it is Kwame Nkrumah — and in Egypt, it is Gamal Abdel Nasser.

In Indonesia, another nation with a demographic profile heavily tilted toward the young, there is the very same regard for Ahmed Sukarno or Soekarno, the nation's flawed but charismatic founder. He, too, was president until he was toppled in a CIA-backed coup in 1965.

There are fewer mysteries in any of this revivalism than there are useful lessons.

Focus on understanding the developing world's habits of memory — and we can understand its aspirations in the global era.

Among the remarkable aspects of the post-Cold War world is how faithfully humanity has picked up where it left off 50-odd years ago.

In many ways, it is as if half a century of East-West conflict had frozen politics and history in time.

For example, many Iranians now seek the very secular democracy Mossadeq stood for in the early-1950s. Indonesia's declared goals today — stable democratic institutions and national integration of its disparate population — are those Sukarno set when he became the brand-new nation's president in 1949.

Let's pause here to note an important feature of the generation of leaders that many developing countries now tend to evoke.

Not one was without his faults. Corruption and cults of personality grew like weeds around more than a few. They were by definition politically immature.

Power tended to concentrate around them even as many of their policies failed — often causing more harm than good.

What frequently amounts to the wreckage of these upstart national leaders' legacies is apparent enough today.

To invoke them now, therefore, is an act of selective memory. But that is not to say we cannot learn from what and how people choose to remember the pasts they have inherited.

By 1965, when Indonesia's Ahmed Sukarno was deposed in one of the postwar era's bloodiest coups, this first generation of leaders in the developing world was beginning to pass into history.

This makes it possible for them to assume a kind of symbolic status. What, then, does the "independence generation," as it is often called, symbolize in the global era?

If its members now have "iconic" status, what do these icons mean for the future?

It is not so much their ideas, as the vision that produced them. They suggested a way by which their nations could contend with the powers that had so recently ruled them.

The charisma that was often an aspect of their political styles was important, too. It gave their people a sense of identity to which they had never before been given the right.

Most of all, these leaders imparted the values of idealism and human agency. The assumption was that the world was common property to be made over as we — all of us — saw fit.

There was no thought then of "it has to be this way" — no fatalistic conviction that "there are no alternatives," as Margaret Thatcher would often put it during her years as Britain's prime minister.

It is precisely these idealistic values, I would argue, that many countries are missing today.

This is why we must look beyond the problems of the independence generation to recognize the poignant truth buried in the developing world's way of remembering it.

Global integration, as it has been conceived, has been cast as an inevitable process over which no one has any control.

People cannot make decisions: Only markets make them — as if markets were autonomous mechanisms free of all human intervention.

This is borne out domestically by the political culture in the industrialized world as well. We live — by and large — in a leaderless age.

Opinion polls rule, and what surveys and "focus groups" tell political consultants the public wants is what determines what elected leaders deliver.

Leaders as followers: It is already a defining characteristic of political life in the United States, in Europe — and it is spreading.

What are the exceptions to this grim picture? My list includes Kim Dae Jung, who just stepped down as South Korea's President, Mohammed Khatami, Iran's embattled reformist, Vaclav Havel of the Czech Republic — and the quiet but not ineffective Megawati Sukarnoputri, Indonesia's President and daughter of the country's founder.

It is useful to recognize these leaders as the inheritors of that first post-war generation. They were unafraid to offer a personal vision of our era.

Each operated on the assumption that we live in an age of many alternatives.

We can reshape the global enterprise to make it work the way we think it should.

Cultures and civilizations can co-exist. Differences can not be just tolerated — but in the best of outcomes celebrated.

These are a few of the principles that the best of the present era's leaders stand for.

Let us not make icons of them: Once again, they all have their flaws.

And let us entertain no illusions as to whether their ideas will easily prevail. They might, eventually — and hopefully they will. But it will not be easy.

It is remarkable how many of today's most interesting leaders and thinkers represent nations in the developing world.

But the same was true two generations back, when the "independence generation" was walking the face of the earth.

Colombia Gets High on GDP Statistics