Intriguing turns and twists of the emerging 2016 presidential race. 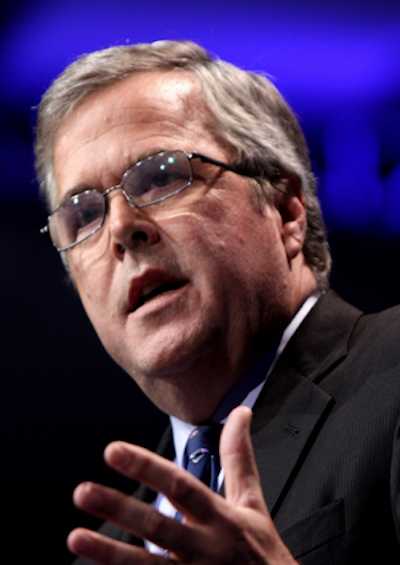 Americans are a surprisingly sentimental people. That, though, is not likely to benefit Hillary Clinton in the 2016 U.S. presidential race.

Democrats may still hope that she has the goods to win. They reason that Americans – not least as an act of buyer’s remorse after the nation elected the first black man as U.S. President in 2008 – will now elect a woman for the White House.

Such a move is certainly long overdue in light of how many other countries have already had women as heads of state. And Hillary Clinton is certainly far more experienced than Obama.

But consider her liabilities as well: One way or another, Hillary Clinton has been at the forefront of the national political debate for over two decades. Pretty much everyone has made up their minds about her.

Electing her has all the charm of buying a pre-owned car. That might be the rational decision to make, but it is a highly unexciting one.

Contrast that with the candidacy of Jeb Bush. He has the surprise factor on his side.

For all the talk about Bush fatigue after the disastrous two-term presidency of George W. Bush, Jeb can introduce himself as a “good” Bush – like his father before.

Reparation for the “wrong” Bush?

American voters may even feel, subconsciously at least, that putting the former Florida governor into the White House in two years time would make up for the previous collective failure of (s)electing the “wrong” Bush in 2000.

There are other important arguments that work in his favor – none bigger than the highly frustrating reality of an extremely fractious U.S. political process.

Given the fact that Republicans are in control of both houses of Congress now, electing Bush might end the harsh partisan gridlock. Jeb Bush appears to be making that a feature of his candidacy.

Something, at least, would get done. Many U.S. voters want that over everything else.

Centrist voters who usually lean toward the Democrats will intuitively see another truly pivotal point – putting the younger Bush brother into the White House is the best chance to resuscitate the moderate wing of the Republican Party.

The really problematic shift of contemporary U.S. politics, after all, was not that the Democrats moved to the left (far from it), but that Republicans tacked hard to the right.

That has unshackled the moorings of American politics and has not been good for the country, either at home or in the world.

Trade off the far-right for moderate control?

To be sure, for people with moderate leanings to vote for Jeb Bush (completing the #41, #43, #45 series) is a risky road to take. All critical levers of power would then be in the hands of Republicans, including the U.S. Supreme Court and many statehouses and governor’s mansions.

Such an outcome would make the United States a far more conservative country electorally than it actually is. And such a voting strategy, were it to materialize, would have to rely on the hope that Jeb Bush would serve as a centrist president.

The expectation would be that he does not side with the hard right of his party and that, in the best traditions of moderate Republicanism, he would be ready to work across the aisle in support of non-ideological, common-sense solutions.

Bloomberg Business Week recently tried to point out in a quasi-investigative piece that Jeb Bush’s candidacy, because he is a businessman, would be likely be tainted in similar ways as Mitt Romney’s was.

That may well turn out to be wishful thinking on the part of the magazine for several reasons.

First and foremost, whatever doubts were expressed by voters about Romney in 2012, they were in many ways rationalizations of the deeper reason why many centrists had their reservations: Romney is a Mormon – and U.S. voters harbor big doubts about that religion.

Also, Romney just never seemed genuine, to the point of appearing robotic. Plus, while Americans like their Presidents tall and handsome, he simply looked like he was fabricated in a lab.

Who is less tainted by money?

Also, Jeb Bush’s likely opposite number is not Barack Obama, a plutocrat in waiting, but Hillary Clinton. If it comes to such a dynastic face-off, Jeb is likely to come across as the one who is less(!) tainted by heavy insider favoritism from moneyed elites.

After the sketchy fundraising they did in the 1990s, the Clintons, after all, literally talked their way to what is now estimated to be a $55 million dollar family fortune.

Raking in endless slices of $400,000 speaking fees, including from quite a few public universities, is just plain odious to many working class Americans.

So much of a turn-off, in fact, that Jeb Bush, even in the heat of a Presidential campaign, would have to say very little about her speechifying.

Everyone is mindful enough of that embarrassing fact – not least because reporters, on a rare bipartisan basis, are turned off by the stories of her extravagant demands.

By comparison, the rather politically blue-blooded Jeb Bush comes across as just another regular guy.

All of that indicates that most likely the biggest hurdle to Jeb Bush getting to the White House is the Republican primaries. That electorate is very conservative and quite opposed to what it sees as “wishy-washy” conservatives like Jeb Bush.

Count on the moneymen to count in 2016

However, count on the moneymen who write big checks for presidential campaigns to have a very disciplining influence on the primary voters in 2016. They will keep their “powder” away from the real right-wing radicals.

And they will remind everyone that, if only Republican primary voters were to act rationally (and do what they used to do, simply anoint the establishment’s chosen favorite son), victory is in sight.

The 2016 electoral path is even narrower than 2012. The election will probably come down to one or two Democratic-leaning presidential swing states such as Ohio and Nevada.

Hence, nominating a moderate — with partisan-crossover and cross-demographic appeal, particularly to Latinos — is the only hope for Republicans.

As evidence for the prospects of success, the Republicans’ big campaign financiers can point to the 2014 mid-term elections.

Those races showed that, if their party manages to keep the Tea Party loony candidates off the ballot in favor of solid conservatives, it would be remarkably successful.

What about the Democrats? They have to do a lot of soul searching indeed. Ralph Nader recently labeled Hillary Clinton both a corporatist and a militarist. The latter may be an overstatement, but the underlying sting rings more true than anyone inside the party should be willing to tolerate.

The Democrats, no less than the Republicans of late, have lost their inner core and moral bearings.

As the 2014 elections showed, for many voters outside the top income strata, it has become very hard to define how the dominant Clinton wing of the party distinguishes itself from the Republicans – at least a moderate version of Republicanism.

And that is going to be the real conundrum for Hillary Clinton in 2016 – if she chooses to run and if Jeb Bush manages to get his party’s nomination.

Nobody knows quite what she stands for. The answer, sadly, depends on the audience she is talking to.

Which is the reason why some real wisecracks have suggested that she should just join Jeb Bush on a national unity ticket.

With a 2016 electoral path narrower than 2012, nominating a moderate is the only hope for Republicans.

Electing Jeb Bush might end gridlock. At least something would get done. Americans want that over everything else

To many Americans, electing Jeb Bush would make up for the failure of (s)electing the “wrong” Bush in 2000

Count on the moneymen who write big checks for presidential campaigns to favor Jeb Bush in 2016.

Electing Hillary Clinton has all the charm of a pre-owned car.

With a 2016 electoral path narrower than 2012, nominating a moderate is the only hope for Republicans.

Electing Jeb Bush might end gridlock. At least something would get done. Americans want that over everything else

To many Americans, electing Jeb Bush would make up for the failure of (s)electing the “wrong” Bush in 2000

Count on the moneymen who write big checks for presidential campaigns to favor Jeb Bush in 2016.

Electing Hillary Clinton has all the charm of a pre-owned car.

6 Facts: American Women Aren’t Going Back to Work (Yet)