The Two Souls and Two Minds of Lindsey Graham

How is the South Carolina Senator forward-thinking on immigration and climate, but not the Middle East? 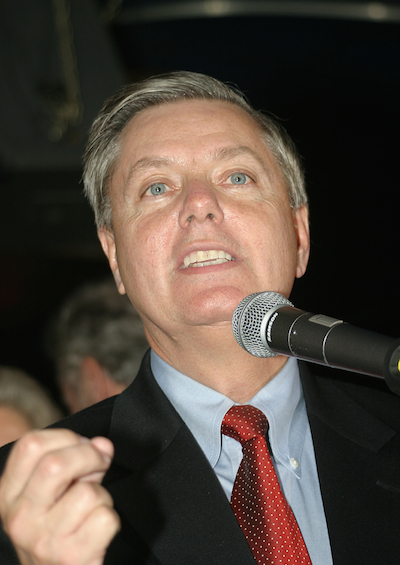 In the often black and white, hyper partisan world of American politics, there are a few people like South Carolina Senator Lindsey Graham. Since June 1, he also happens to be one of a projected 17 presidential candidates of the Republican Party for the 2016 elections.

To his credit, Senator Graham is quite remarkable in his courage. Among his fellow Republicans, he stands out for speaking the truth on two issues. He advocates for much more open-mindedness and realism on the issue of immigration. He does so out of conviction and a proper economic and social understanding – not some shrewd political calculation to mouth words that will help the Republican Party “catch” Hispanic voters.

He is also one of the few sensible voices of his party on the issue of climate change. In a conversation with Jeffrey Goldberg at the recent Aspen Ideas Festival, Senator Graham laid out his views as follows:

You know why I think climate change is real? Because I think it’s real. I’ve been to Alaska, I’ve been to the Arctic Circle, I’ve been all over the world looking at this issue. When nine out of ten climatologists tell you that CO2 emissions generated by man-made activity are creating […] greenhouse-gas effect that traps heat and is heating up the plant – when nine out of ten tell you that, why should I believe the one?

So, if I went to ten doctors and nine of them said, hey, you’re going to die and the other says you’re fine, I think it would be odd to believe the one.

So, I’m not a scientist. How many of you heard that? Well, hell, if you’re not, ask other scientists – people who are. Why don’t you listen to them when they talk to you? So the issue should be the solution, not the problem.

[…] if half of this stuff is right, it’s bad news. That it’s a national security problem in the making. As the oceans rise and as food gets to be less plentiful, as the land gets more arid, as the effects of climate change begin to visit us on a global level, you are going to have a very destabilized world.

So why not make it a business-friendly endeavor? Why not take the environmental community as not completely crazy and join with the people who are in the energy business who are a looking for a way to make a profit but understand that lower carbon is probably the way to go and see if you can create an emission standard that’s better for business, see if you can incentivize alternative energy and find an all of the above approach to fossil fuels. To me, that’s what the next President needs to do.

Alas, for all the credit and glory the South Carolina Senator deserves for his positions on these two topics, on one issue he remains extremely close-minded. That is the U.S. policy in the Middle East.

An early and unrelenting advocate of the U.S. invasion of Iraq, he is now equally adamant and unrelenting in his opposition to the United States finding any agreement and understanding with Iran.

What makes Graham’s position on this latter issue so puzzling is the fact that, with the benefit of hindsight, he appears willing to speak openly and critically about his ill-fated boostering of the Iraq invasion.

My buddy John McCain and I have spent a lot of time learning the hard way. I messed up when it came to Iraq, I didn’t understand what would happen if you took the Iraqi army down, now I know.
[…]
But if I know now, if I knew then what I know now we wouldn’t have had a land invasion but would still be going after Saddam.
[…]
In many ways, we’re haunted by the Iraq War when it comes to what to do today in Iraq and Syria.

While he is thus very close to having had his come-to-Jesus moment on Iraq (though his proposed fixes still seem to involve more ground troops there), the way in which he argues about Iran today – which he disdains basically in any and all aspects – has an eerily familiar ring, both in tone and substance.

Strike the words “Saddam Hussein” and “WMD” and insert the words “Khamanei” and “nuclear” – and the language remains the same. He also eagerly insists that the Syrian regime be removed as well.

Since he was wrong on his anti-Saddam hyper-activism then, which ended up backfiring badly on the United States, U.S. interests as well as U.S. troops, he may be wrong on his inflexible positions on Iran (and Syria) now.

Whatever the merits of the specific arguments, it is noteworthy that the Senator – as well as his senior sidekick, Arizona Senator John McCain – just have an emotional need to bedevil another nation, just for the sake of it.

This is not to divine with certainty the policy positions really held by Iran’s top leaders. It is just to caution against a United States Congress, whose top leaders seem to be acting more out of an emotional and psychological need to blame somebody – rather than to coolly calculate what U.S. interests are.


Editor’s note: Thanks to The Atlantic’s Jeffrey Goldberg for conducting the conversation with Lindsey Graham in Aspen at the 2015 Aspen Ideas Festival.

In US politics there are few like Senator (& Republican presidential candidate) Lindsey Graham.

How is Lindsey Graham forward-thinking on immigration and climate, but not the Middle East?

An early advocate of the invasion of Iraq, Sen Graham is now as adamant in his opposition to Iran.

In US politics there are few like Senator (& Republican presidential candidate) Lindsey Graham.

How is Lindsey Graham forward-thinking on immigration and climate, but not the Middle East?

An early advocate of the invasion of Iraq, Sen Graham is now as adamant in his opposition to Iran.