Madonsela’s Leadership: A Ray of Hope in Turbulent South Africa

Thuli Madonsela is one of those people in South Africa whose leadership bears the hallmarks of Mandela’s exceptional ethos.

Thuli Madonsela is one of those people in South Africa whose leadership bears the hallmarks of Mandela’s exceptional ethos. 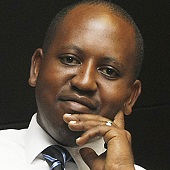 Once in a generation, a leader emerges whose influence captures the imagination of an entire nation — and perhaps beyond. In the context of South Africa, Nelson Mandela is one such leader.

Mandela embodied a sense of purpose, vision and determination. These attributes constitute the essence of what differentiates exceptional leadership from bad leadership.

While history remembers Mandela for his unrivaled ability to help reconcile South Africa, there are thankfully others in our country whose leadership also bears the hallmarks of Mandela’s exceptional leadership ethos. Thulisile (Thuli) Nomkhosi Madonsela is one of these people.

South Africa in recent weeks is facing increased risk of political instability amid mounting protests by black university students over demands for free education and signs of in-fighting within the ruling African National Congress (ANC). At such a time, Madonsela’s strong leadership has provided the country with a ray of hope.

She has been South Africa’s Public Protector, a constitutionally mandated role since 2009. She is likely to be remembered for her unwavering commitment to principle.

Because of her zest and her determination, Thuli was named by Time magazine as one of its 100 Most Influential Persons in 2014, alongside Barack Obama and Angela Merkel (to name just a few).

Thuli’s term of office ended this week (on October 14, 2016) after a difficult, but seminal, tenure. Like any good public prosecutor, she certainly rocked the boat.

Unsurprisingly, it also did not look as if she was going to leave on a whimper. Two days before her departure, she locked horns with President Jacob Zuma.

President Zuma quickly lodged a court bid to block the release of what appeared to be one of Mandonsela’s final explosive reports over claims that his office had been “captured” by a family clique of Indian businessmen known as the Guptas.

They are accused, among other things, of interfering in the appointment of cabinet ministers. Earlier this year, Deputy Finance Minister Mcebisi Jonas disclosed that the Guptas had offered him the job of his boss, Nhlanhla Nene, who was eventually fired by Zuma last December.

During her final week in office, Madonsela demanded that Zuma give further information to finalize the probe into the so-called “state capture.” Instead, Zuma appeared intent on frustrating the probe until Madonsela’s successor Advocate Busisiwe Mkhwebane was in office.

Zuma’s antics coincided with an announcement by the National Prosecuting Authority that it would be charging current Finance Minister Pravin Gordhan with fraud and had summoned him to make his first court appearance on November 2, 2016.

These developments, along with the apparent leadership vacuum and the poor showing of the ANC in recent municipal elections have all laid bare the frustrations that have engulfed South Africa.

The country faces rising unemployment, rampant corruption and signs that Zuma’s administration keeps lurching from one crisis to the next, compromising state institutions along the way.

But, despite the ensuing political tumult, Madonsela’s legacy is unlikely to be overshadowed by any of the mechanizations to discredit her even after she is out of office.

Madonsela will be remembered for her unwavering commitment to Principle, something that South Africa needs if it is to avoid unraveling Mandela’s dream of a country at peace with itself, where the rule of law reigns supreme and where all are equal.

A symbol of courage

But, for all the triumph of the end of Apartheid, it is also indisputable that too many leaders of the African National Congress, South Africa’s ruling party since 1994, had become far too comfortable with, and adept at, using the accoutrements of political power for their own benefits.

It is the painful task of public prosecutors to rein in such practices of an ever more detached political class. Such “detachment,” however, is clearly not what the promise – and the obligation – of democracy is all about.

In particular, we the people cannot tolerate spending practices on the part of our democratically elected leaders that resemble feudalist times.

Remarkably, South Africa’s Thuli Madonsela is also far from the only woman that has shown the guts to stand up to the powers that be. Similarly courageous officials can be found in Latin America, for example.

To be sure, there are also courageous men in this field of work as well (just consider many Brazilian anti-corruption judges).

Leading from the frontlines

As public protector, Thuli had the unenviable task of taking on the “establishment” to hold accountable those who violated the public trust. Just like Mandela, she is someone who has led from the frontlines, by example and with moral clarity.

Throughout her time in office, Thuli showed great courage even in the face of ridicule, scorn and disdain from some of the very same people that ought to have done everything to make it possible for her to do her job unhindered.

The ANC tried unsuccessfully to usurp the powers of her office. The party argued that her reports into malfeasance were non-binding and merely recommendations.

This was part of numerous attempts to vilify her. It was even alleged by some that she was an “agent” in the hands of foreign powers, a claim she dismissed off hand.

What riled the ANC was her pursuit of the truth in a matter involving President Jacob Zuma. Thuli successfully censured Zuma for unduly benefiting from upgrades to his homestead at the taxpayer’s expense.

Her investigation was validated in a scathing ruling by South Africa’s Constitutional Court, which found in April of 2016 that Zuma had violated the country’s Constitution. The Court ordered him to repay a portion of the $17 million of public funds spent on non-security upgrades at his Nkandla homestead.

Thuli’s work predictably garnered her friends as well as enemies. Even then, she was able to rise above the fray, and lay a strong foundation for accountable leadership.

The reason why Thuli’s legacy is so instructive is that her work – and the lessons that emerged from it — can also reshape one’s own thinking as a leader. Thuli said: “Seek first to understand before seeking to be understood.”

Her other lesson is that a leader “must remain optimistic, even in the wake of incredible negativity, and you must make sure you are leading and not misleading.”

"We the people" cannot tolerate spending practices by our democratically elected leaders that resemble feudalism.

Thuli Nomkhosi Madonsela is likely to be remembered for her unwavering commitment to principle.

Thuli censured Zuma for benefiting from upgrades to his homestead at the taxpayer's expense.

"We the people" cannot tolerate spending practices by our democratically elected leaders that resemble feudalism.

Thuli Nomkhosi Madonsela is likely to be remembered for her unwavering commitment to principle.

Thuli censured Zuma for benefiting from upgrades to his homestead at the taxpayer's expense.

The New Battle For Berlin