Comparing the agendas and performance of Pope Francis and China’s Xi Jinping. 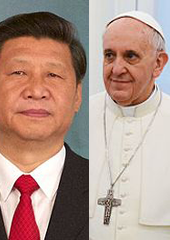 Putin and Obama aside, two men, each in their own ways, currently dominate the global agenda. They are Xi Jinping, China’s new president, and another man, Jorge Mario Bergoglio.

In March 2013, exactly one day before President Xi Jinping took over the reins in China, the Argentine Jesuit became Pope Francis. Both of these men took charge of two gigantic flocks — each consisting of one billion plus people.

But this is only where the stunning parallels start. China’s Communist Party and the Catholic Church share more than certain organizational characteristics, including being heavily male-dominated power structures. In addition, they both offer up ideologies or faith systems with an absolutist claim. That isn’t an easy proposition in an era when fewer and fewer people are inclined to adhere to such rigid propositions.

A lot of housecleaning to do

And China’s and the Vatican’s new leaders claim to dedicate their office to reducing pomp and outright ethical failures, if not criminal acts, in their respective hierarchies. They also want to combat poverty in the population at large.

Twelve months into their respective new eras of leadership, this is a good moment to ask how the two new “shepherds” are doing. Are they going to deliver on the “new spirit” that is long overdue in both of their cases?

Pope Francis has certainly been quite effective in creating real breaks from past Vatican practices. Almost every one of his public pronouncements and appearances underscores his intent to keep the church hierarchy from “excelling” in all the false ways — its self-centeredness, remoteness from the people, as well as in a seemingly never-ending series of profound transgressions.

Those acts of malfeasance, uncomfortably widespread and often in the headlines (despite and because of longstanding past efforts to sweep “things” under the rug), featured sexual transgressions as well as financial ones. Pope Francis has promised to put an end to all that.

While nobody questions his forthrightness and intentions, there are very real questions about whether he — or, for that matter, anybody — can really wrestle down the Vatican’s powerful hierarchy.

The traditions of the Church are such that they lead one to expect a lot of resistance from all those who have transgressed, especially the Italian “mafia” inside the Curia, or simply prefer to keep things the way they are. After all, the system as currently established works well for them. As so many men before them, they are also not much concerned about the fate of their institution in their own personal afterlife.

It is amazing to observe just how parallel the challenges are when one looks at the world from inside the power structure of the Chinese Communist Party. It also tries to hold on to the way things are and bases its practical powers on an internal teaching and disciplining system that is vast.

CCP officials, just as Catholic priests, have had their troubles with sexual transgressions, although evidently much more of the traditional kind. Their financial transgressions, though, are far larger than those of the Catholic clergy. That is first and foremost a matter of much larger targets of opportunity.

The world has thus plenty of reasons to look very intently at the parallel developments along the Vatican-CCP axis. It will be fascinating to watch which one, if either, will manage to achieve a turnaround.

To be sure, plenty of the formerly faithful have departed from the teachings of either “church” for good. They don’t care any longer about the original mission (or have no hopes for a turnaround in time).

There had been indications that, in part due to the New York Times’ revelations about the extreme wealth of the Chinese leaders’ families, the entire membership of the Politburo of the Chinese Communist Party would detail all of their financial assets. That was seen as a concerted effort not to lose the support of the population at large.

Among the Chinese people, there is a great deal of frustration over political leaders at all levels of government. Either directly or through their family networks, they are seen as steering public money not just into their own coffers, but into safe havens abroad, beyond the reach of any Chinese authorities.

Some analysts now say that the genie is out of the box and will be hard to contain. Even so, China’s president Xi Jinping needs a very visible symbol of an intense self-disciplining effort — both to create legitimacy with the people and to enhance his own authority.

But bringing more openness is a risky maneuver — not just because it will raise the ire of many insiders. It can also easily turn into the proverbial Pandora’s box.

After all, if the CCP does not want to lose its legitimacy, these housecleaning efforts will have to trickle down the entire party hierarchy, way beyond Beijing to the provincial and the township level. In essence, the CCP faces a choice between tackling a big problem now — or an even bigger one later.

The Pope, meanwhile, is introducing unimaginable new measures. His recent request to national bishops’ conferences throughout the world to conduct a poll of Catholics about their opinions of some of the Church’s teachings is an amazing step.

It has the potential to start turning the Catholic Church from a pure top-down organization to a more participatory one. Certainly, his decision to ask the faithful for input ahead of this year’s big bishops’ conference is an unprecedented move to enhance the Church’s focus on its “customers.”

As a matter of fact, the Chinese leadership, in its own way, ultimately does the same thing. All the Internet monitoring, mainly focussed on discussion threads of microblog sites, also (although far from exclusively) serves a constructive purpose. It is to provide the political leadership with direct feedback from the population on the performance of CCP managers at all levels of society and all across that vast country.

The world waits with great interest whether President Xi Jinping and Pope Francis will succeed in their respective turnaround missions.

Editor’s note: This is an updated version of an article that first appeared on The Globalist on December 23, 2013.

Francis I became the new pope, exactly one day before President Xi Jinping took over the reins in China.

Two huge flocks, each consisting of one-billion plus people, started out their journeys under new leaders last year.

China’s Communists and the Catholic Church both offer up ideologies or faith systems with an absolutist claim.

China's and the Vatican's new leaders claim to dedicate their office to reducing pomp and outright ethical failures.

CCP officials, just as Catholic priests, have had their troubles with sexual transgressions.

Francis I became the new pope, exactly one day before President Xi Jinping took over the reins in China.

Two huge flocks, each consisting of one-billion plus people, started out their journeys under new leaders last year.

China’s Communists and the Catholic Church both offer up ideologies or faith systems with an absolutist claim.

China's and the Vatican's new leaders claim to dedicate their office to reducing pomp and outright ethical failures.

CCP officials, just as Catholic priests, have had their troubles with sexual transgressions.

United States: Not Exceptional, But One Nation Among Many