The Grenfell Tower tragedy is a classic “what have we become” moment. 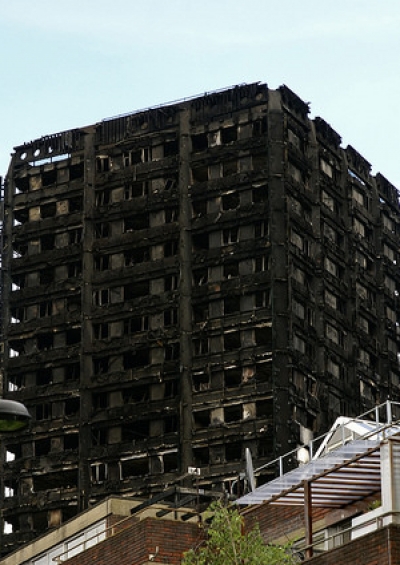 We in the West feel free to denounce what we judge to be the misdeeds of other governments in the treatment of their citizens. The United States and the United Kingdom are the most uninhibited in doing so.

Given that, it is only appropriate and proper that that they themselves should be subject to similar scrutiny. Otherwise, we validate the charges of hypocrisy leveled against us.

Sometimes in the life of a nation, there are moments when a sudden event illuminates with stunning clarity an essential part of its character. The effect is most powerful when the trait exposed runs counter to the long-established image.

Such a moment has arrived in Britain with the Grenfell affair. No one can now avert their gaze from what post-Thatcher society has degenerated into. It is a classic “so, this what we have become” moment.

Although it is less dramatic than the installing of Donald Trump in the White House, Grenfell has torn away the veil from an unbecoming national visage.

The revealing truth is portrayed in graphic pictures and shameful words. A tower block going up in flames like a papier-maché construction. Close to a hundred people killed – and still counting.

Plus, no assistance whatsoever from the responsible Kensington & Chelsea Council. An insulting absence of concern or commitment to redress failings by the same authorities. A curtain of secrecy on initial plans to scatter the survivors across the length and breadth of England.

Next, offers of supposed long-term relocation in basement apartments on heavily trafficked roads or other towers slated for demolition. Many families split up and/or shuffled from one temporary accommodation to another.

As well, a self-absorbed Prime Minister refusing to meet the victimized families. Revelations that the flammable cladding material installed in a refit just three years ago comes with warnings not to use in high-rise buildings.

The management company and the outfit doing the work knowingly went ahead in order to save a few thousand pounds (K. & C. is the wealthiest council in the U.K. – with a cash reserve fund close to half a billion dollars).

That there had been serial warnings from the London Fire Brigade authorities and parliamentary committees as well as the residents association about the imminent, high risk of existing practices in thousands of similar public-build blocks around the country (hundreds with the same cladding material have now failed belated inspections).

These buildings also lack sprinkler systems, alarms or fire doors, and a mandatory secondary route of egress. By contrast, all these systems have been legally required in New York City since 1967 – and were de facto norms for decades previous, e.g. the ubiquitous external fire escapes.

The Tory government buried them all. That negligent behavior conformed to their boastful commitment to removing burdensome regulations from an unduly constrained economy and society.

Survivors were shut out of a special Council meeting scheduled to plot a strategy for handling the crisis – so, too, the press. When a judge ordered the Council to rescind the ban, it summarily cancelled the meeting.

Victims’ relatives and Grenfell residents who escaped the fire also were denied an opportunity to ask questions in person at a coroner’s hearing.

Council member and official spokesperson Catherine Faulks told a BBC interviewer that the press demand was just a “stunt,” and that the residents clamoring to attend were professional agitators rather than Grenfell victims.

This past Wednesday, the Council’s abject incompetence was officially confirmed when the Westminster government announced that key services will be taken over by a specialist “taskforce” made up of outside experts.

Phased in gradually, this privatization of public services will not be charged to the K. & C.’s burgeoning account. It is not known whether the specialist consultants will include a public relations adviser – perhaps someone recommended by David Cameron from his old firm, Carlton Communications, where he honed his skills.

The deeper, self-evident truth is that the (relative) poor are viewed as a nuisance in the Tory precincts of K. & C. Race has added to the distasteful mix. Many residents are of South Asian, Caribbean or African origin – although a large fraction from that background are British born.

Those origins were played up in initial coverage. In fact, it seems that about a third are white – most of those Brits.

Very few are on “welfare.” Many residents have purchased or pay quite high rents for their apartments (up to 2,000 pounds a month). They are ordinary working people. They do stand out in a posh district.

And amidst all that, Tory politicians and officials are more concerned about preserving their own “image” and the country’s. It is hard to imagine a developed country that is acting more callously than that.

In the life of a nation, there are moments when a sudden event illuminates an essential part of its character.

With the Grenfell affair, no one can now avert their gaze from what post-Thatcher society has degenerated into.

The Grenfell Tower fire has torn away the veil from an unbecoming national visage.

In the life of a nation, there are moments when a sudden event illuminates an essential part of its character.

With the Grenfell affair, no one can now avert their gaze from what post-Thatcher society has degenerated into.

The Grenfell Tower fire has torn away the veil from an unbecoming national visage.

The Liberal International Order: Just Who Shredded It?