Women in Europe are still rarely the leaders of well-known parties. Now, the two most prominent of them could possibly leave the political top level in the same week. 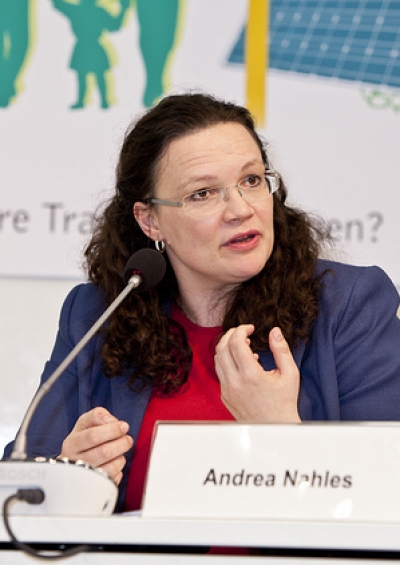 Women are still vastly underrepresented among the top leaders of key political parties in Europe. Under those circumstances, it is all the more awkward that it appears as if the two most prominent among them may well be forced to leave their posts the very same week.

Following grueling pressure from her intra-party adversaries, Theresa May has announced that she will resign on June 7.

The other woman, Andrea Nahles, the SPD leader in Germany and hence the head of the junior partner in the German “grand coalition” government, announced on June 2 that she, too, will leave her posts this week.

What unites the two women, despite all their ideological differences, is that they have both been extremely loyal party soldiers. Since youth, their highest ambition has been to reach the top post of their respective political party. In this respect, both women will likely fall into a deep hole, once both have been ruthlessly forced out by their adversaries.

Contributing to their downfall

Nobody can argue that Theresa May, the current British Prime Minister and head of the Conservative Party, and Andrea Nahles, the former SPD party leader, didn’t contribute to their downfall.

May was much too inflexible for way too long when it came to Brexit. And Nahles had difficulties to act appropriately on the big stage and not to come across as too brash or trivial.

Even if this was insinuated again and again, the political failure of the two had nothing to do with femininity. If, for example, Theresa May lost some of her composure when announcing her departure, that was a perfectly human reaction, but not a consequence of not being as “tough” as a man.

On the contrary, she often acted as cranky as a stereotypical British gentleman. And the failures of Andrea Nahles were usually based on a misplaced joviality. They were not a consequence of femininity.
The increasingly hidden hints in the other direction only prove how much politics is still a men’s club today.

The SPD likes to absorb itself in harsh disputes over personnel when, in fact, its troubles are mainly based on fundamental policy choices.

Essentially, there are two unbridgeable camps in the SPD. One camp wants a determined turn to the left and strives, in terms of policy, for a kind of “reunification convention” with Die Linke.

It would end the split that occurred when leftists in the SPD , frustrated by Gerhard Schröder’s reform path in 2004, left the main party led by then-Finance Minister Oskar Lafontaine.

However, such a maneuver by the SPD will not bring the it back to its glory years in the West. The problem the SPD suffers from at its core is a simple historical principle: “Mission Accomplished.” No amount of turning of the personnel carousel will change that.

The SPD has run its course

The SPD has, impressively, but somehow conclusively, run its historic course. The Federal Republic of Germany is largely shaped politically by social democratic forces.

This became fabulously evident this week when Angela Merkel was lauded at Harvard before her commencement speech as the German Chancellor responsible for outstanding socio-political achievements, such as the minimum wage, marriage for all, and more.

What remains in terms of reform dynamics in German society is largely represented – and captured – by the Greens. This party is far too clever to let the SPD steal, or usurp, its political powder.

However desperate the hope for a “deus ex machina” (nor a “dea”) is inside the SPD, that fundamental realignment won’t change.

In other words, Andrea Nahles — despite her mistakes — was little more than a convenient whipping “boy.” The other whipping boy is Theresa May.

Yes, she worships national sovereignty way too much and her stoically inflexible recitation of “Brexit means Brexit” has made her a subject of international ridicule.

But the suggestion of – mostly – others among the Tories (especially Boris Johnson) that they could achieve a better result amounts to squaring a circle. Even beyond sticky negotiating issues such as Ireland, the entire Brexit maneuver is about much more than Britain’s orderly or disorderly exit from the EU.

At its core, it is about the completely unresolved question of national identity. The Tories’ oft-recited theme of national sovereignty is only the battlefield on which the identity debate takes place.

To Germans, the situation in which the UK currently finds itself is somewhat curious. They remember that from the 1960s to the 1990s, Britons confessed being bemused about the constant German debates about Germany’s sense of national identity.

This shoe is now very much on the other foot. What’s at stake is the “United” Kingdom itself, given the resurgent Scottish and (Northern) Irish question.

Thus, all those who believe that removing their women leaders will lead them to much brighter times politically are deluding themselves.

The crisis of the two parties at the opposite ends of the political spectrum — the SPD in Germany and the Tories in the UK — is of a structural, political nature. It reaches much deeper than their current and former leaders.

While the future will tell, at least currently both parties find themselves at the same starting point. In the elections to the European Parliament, the SPD received 15.5% of the national vote — and the Tories 13.7% of theirs.

Women in Europe are rarely the leaders of well-known parties. Now, Both Theresa May and Andrea Nahles could leave in the same week.

What unites May and Nahles, despite all their ideological differences, is that they have both been extremely loyal party soldiers.

Nobody can argue that Theresa May and Andrea Nahles didn’t contribute to their downfall.

All those who believe that removing their women leaders will lead them to brighter times politically are deluding themselves.

Women in Europe are rarely the leaders of well-known parties. Now, Both Theresa May and Andrea Nahles could leave in the same week.

What unites May and Nahles, despite all their ideological differences, is that they have both been extremely loyal party soldiers.

Nobody can argue that Theresa May and Andrea Nahles didn’t contribute to their downfall.

All those who believe that removing their women leaders will lead them to brighter times politically are deluding themselves.

How the German Economy Is Falling Behind