Vladimir Putin: The Antithesis of a Success Story

The annexation of Crimea may remain Putin’s only success in his Cold War against the United States. 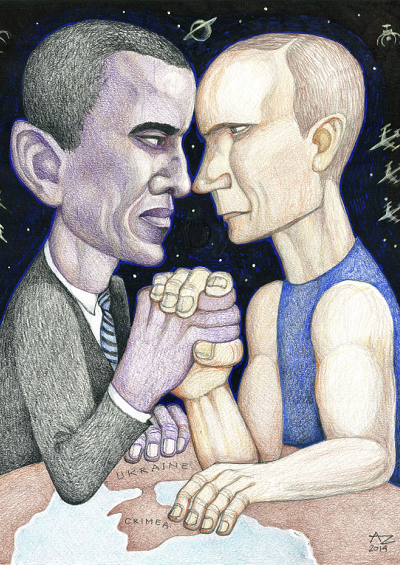 For more than a year, a typical evening news program on Russian television would open with a standard statement: “Tonight, we begin our broadcast with events in Ukraine.”

Then, the entire half-hour format would be devoted to the iniquities of the “Kyiv junta” and successes of the heroic Donetsk and Luhansk fighters, with little or no mention of what was happening elsewhere in the world or, for that matter, in Russia – as though Russians’ own country had fallen from the face of the earth.

In addition, several very popular talk shows hosted by famous TV personalities have been wholly dedicated to the task of maligning Ukraine, its people and its government.

The national fixation would seem strange, considering repeated official claims that the Russian Federation has no troops in eastern Ukraine.

But the truth is that the Russian government doesn’t believe it is fighting Ukraine. It is fighting in Ukraine and its real adversary is the West and more to the point, the Great Satan itself, Washington.

Vladimir Putin confirmed this yet again in the odious TV documentary “Crimea: the Path to the Motherland,” which aired across Russia last weekend, by calling the United States “the true puppeteers” of the Ukrainian revolution.

After that, the war has not been going especially well.

On the contrary, all of Putin’s plans have failed. After the flight of buffoonish Viktor Yanukovych, Ukrainians have been able to elect a legitimate government and to build a stronger, battle-hardened military.

Ukraine’s economy is struggling, but it has not collapsed and bankruptcy is now unlikely, given the $17.5 billion aid package approved by the International Monetary Fund earlier this month. Slowly but surely, the Ukrainian economic system is undergoing the necessary reforms that have been delayed by a quarter of a century.

Meanwhile, Putin’s Novorossiya project, had envisioned annexing eastern and southern portions of Ukraine to connect by land to Crimea and to link with the breakaway Transnistria region of Moldova. The project has failed miserably, shrinking to the size of two small, lawless and starving “People’s Republics.”

Outside of Ukraine, a wider war against the West has been going even worse.

The European Union shrugged off Gazprom’s bluff, demonstrating that Russia needs European customers for its natural gas much more desperately than Europeans need the gas to keep warm in winter. And all the while Europe continues to diversify its sources of supplies of natural gas — away from Russia.

Russia’s bellicose stance has done nothing to shore up international oil prices, either. Even though Russia produces around 10% of world crude oil, its price has been falling steadily since mid-2014 and is now plumbing fresh multi-year lows, with the Brent benchmark trading below $54 per barrel.

Last year, when the United States and its allies imposed sanctions on Russia, Putin banned food imports from those countries in return. But if he had hoped to damage their economies, it was a resounding flop.

Even the EU, Russia’s major trading partner, shrugged off those sanctions rather easily, finding new markets for its food products. Russia’s own economy, meanwhile, has been reeling. Food prices in particular have rocketed, and quality and selection have deteriorated sharply.

Russia’s obsession with its war against Washington is in sharp contrast to Washington’s complete indifference to Russia. Back in 2004, I wrote an op-ed for the Wall Street Journal which I titled “Russia off the Radar Screen,” discussing how inconsequential Russia had become in world affairs.

But at least back then it was not “rising from its knees” and flexing its muscles. Now, the situation is different. Moscow has redrawn international borders and has started a war in Europe. Moreover, it has revived the Cold War and is spending its remaining rubles on building up its military.

Nevertheless, the American media continue to ignore Russia and its leader. Take recent events, for instance, when Putin had disappeared for more than a week, cancelling important international and domestic meetings. The Russian and Ukrainian portions of the Internet exploded with intense speculation.

Fantastical versions ranged from a stroke to a palace coup and from a secret visit to his girlfriend’s maternity ward in Switzerland to a descent to the underground nuclear bunker. In the United States, there has been some lazy speculation in the media on the subject of “Where is Mr. Putin?” but it was certainly not front-page news.

National Public Radio, the U.S. equivalent of the BBC and the best source for international news, never even mentioned Putin’s disappearance in its hourly news summary.

Now in the same Crimea documentary, Putin declared that if his annexation of Crimea had not gone smoothly, he was prepared to activate Russia’s nuclear forces. In retrospect, it was, potentially, the scariest nuclear crisis since the Cuban missile standoff more than half a century ago.

It certainly signals the return to Cold War rhetoric. Then, reappearing in public the next day, Putin also put 40,000 Russian troops and the Northern Fleet on full alert.

Not only did Wall Street stage a rally on the same day, but the DAX index of German stocks set a new record, rising above 12,000 for the first time ever – even though Germany, of course, is in the immediate proximity of the scary Russian Bear.

Putin’s attempts to do enough damage to the West to get noticed are reminiscent of Ella the Cannibal, a character in the Soviet satirical classic The Twelve Chairs (written, incidentally, by two Odessa natives, Ilya Ilf and Evgeny Petrov).

Having seen the picture of Miss Vanderbilt, the daughter of the American railroad magnate, on the cover of a French fashion magazine, Ella pulls all the stops to compete. She goes on a buying spree, severely straining her family budget.

Ella’s efforts are fairly innocuous. Not so Putin’s. He’s clearly determined to raise the ante until the world sits up and pays attention.

Watching Washington ignore his antics may be amusing, but it is also a little surreal and quite scary. It seems that the Russian president is not going to rest until Barack Obama calls him to the negotiating table.

Judging by how little attention has been paid to his efforts to date, it seems it will take no less than some form of nuclear blackmail.

It may be a far-fetched notion, but it could certainly happen. As Russian opposition leader Boris Nemtsov said in an interview not long before he was murdered on Feb. 27, “You should be aware that Putin is completely insane.”

Editor’s Note: This article was originally published on the Kyiv Post.

Russia's proxy war against the US has not been going especially well.

Russia has revived the Cold War and is spending its remaining rubles on building up its military.

Putin is clearly determined to raise the ante until the world sits up and pays attention.

In the words of Boris Nemtsov: “You should be aware that Putin is completely insane."

Russia's proxy war against the US has not been going especially well.

Russia has revived the Cold War and is spending its remaining rubles on building up its military.

Putin is clearly determined to raise the ante until the world sits up and pays attention.

In the words of Boris Nemtsov: “You should be aware that Putin is completely insane."

Victors’ Bonus: What Israel Could Learn From Athens